The €11 product described as the world's best eyeshadow primer

A must if your eyeshadow refuses to last the day.

We're more than a little obsessed with eyeshadow given its transformative powers but of course, getting it to stay in place isn't always easy.

Nikkie Tutorials is a name that beauty fans will be very familiar with as the MUA and YouTuber has a major fanbase, 9.7 million followers FYI, pretty impressive when all is said and done.

When she recommends a product, people tend to listen and one of her latest must-haves is P.Louise Base in Rumour.

The Cosmopolitan gals alerted us to the fact that Paige Louise, a cruelty-free makeup brand based in the UK, first came up with the idea of using MAC's Select Cover Up Concealer as an eyeshadow primer.

Going one step further, they created a new product, which Nikkie has described as the best in the world.

Nikkie couldn't say enough good things about the primer and most importantly, it stands the test of time lasting for seven hours without creasing. 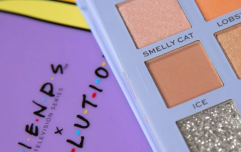 END_OF_DOCUMENT_TOKEN_TO_BE_REPLACED

She also gave the pigmentation and coverage top marks and for a budget product, it appears to deliver the goods.

At the moment, the primer is only available in one option, Rumour, but further shades are being developed to cater for different skin tones.

Ok the QUEEN has spoken ? @nikkietutorials Im blown away I will be MIA for a while whilst I get my s**t together ??

popular
10 Dublin restaurants with outdoor areas we'll be hitting up for the next 3 weeks
Scientists discover potential “game changer” that “could help eliminate Covid-19”
WATCH: Netflix to release documentary on the Watts family murder
Someone has ranked the penis size of men from all over the world
Kate Middleton has addressed the rumours that she's pregnant with her fourth child
Gardai investigating "all circumstances" as young woman is found dead in Dublin apartment
The Christmas movies TV channel is launching this week
You may also like
1 week ago
Ashley Kehoe: "Unfollow accounts that don't make you feel good about yourself"
1 week ago
Charlotte Tilbury reveals new Bejewelled Eyes to Hypnotise instant eye palette
2 weeks ago
Maskne: How masks are causing breakouts and what you can do about it
3 weeks ago
Hang onto that summer glow: 5 clean beauty buys I am obsessed with now
3 weeks ago
Everything you need to know about Jennifer Lopez's new beauty line
4 weeks ago
This two-ingredient mask promises to brighten your face and help with acne scars
Next Page