We were beyond devastated last year when Urban Decay announced they were retiring the Naked OG.

It was the staple of just about any beauty lover's makeup bag and, after eight years on the market, it was definitely be missed.

Now, the brand have announced a brand new Naked palette which will definitely have fans of the original one lining up.

And it looks like it'll be hitting stores very soon.

Urban Decay founder Wende Zomnir shared a sneak peek at the palette on her Instagram account this afternoon.

She wrote alongside the photo:

"So… I know your taste in your go-to shades have changed (so have mine) so we decided to give NAKED a major glo-up. Say hello to Naked Reloaded." 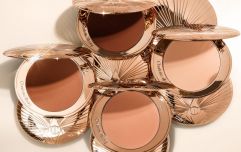 END_OF_DOCUMENT_TOKEN_TO_BE_REPLACED

The brand say that the palette was created with "every age, skin tone and gender" in mind - and the "universally flattering" neutral shadows look like an absolute dream.

It has six mattes and six shimmering metallics, with the two shades on each end appearing to be in larger-sized pans - 'MVP' colours, maybe?

The shades are called:

According to their Instagram posts, the Naked RELOADED will launch across the globe starting February 18.

We'll see you in the queue, so.

popular
#Covid-19: People should limit themselves to one sexual partner, says Dr Holohan
These sustainable Irish sweaters are making people smile, and they're back in stock tonight!
Brown Thomas and Arnotts to phase reopening from next week
Lookdown looks: I was wearing tracksuits 24/7 before it was cool
Get ready to live like the stars because Lidl is selling an entire home cinema range
After days of silence, Scott and Sofia finally comment on the break up rumours
Body found in search for missing five-year-old boy in Co. Mayo
You may also like
1 month ago
Time to relive your teens - the Juicy Tube is coming back
1 month ago
Have you tried the foundation that's sold every two minutes across the world?
3 months ago
Catrice loves PETA - the 100 percent vegan lipsticks that benefit a good cause
3 months ago
This week's Curated With Cassie is about brunch burgers and boobs!
3 months ago
Bride-to-be? You'll want to tell your makeup artist about this glow-giving face product
3 months ago
No chemical peel needed: 7 easy ways to achieve the glowing skin of your dreams
Next Page