When we think of pioneers in the Irish meat industry, we don't necessarily think of a mum of four.

But that's exactly who's at the helm of one of the most exciting new meat brands in the country right now.

Noreen Doyle is behind The Irish Biltong Company, which makes a high-protein beef snack that's taken the market by storm.

END_OF_DOCUMENT_TOKEN_TO_BE_REPLACED

The product, a type of dried beef that has its origins in South Africa, is riding high on the boom in popularity of healthy snack foods.

Noreen spent years developing the product but said that many in the meat industry dismissed her because she was a woman.

"It is a very male-dominated industry and my initial challenge was trying to get people to take me seriously," she tells us.

"The meat industry can be very aggressive because it’s so competitive.

"There was quite a number of barriers but I am hugely determined."

"It was really a case of sh*t or get off the pot."

END_OF_DOCUMENT_TOKEN_TO_BE_REPLACED

Going back a few years, very few people in Ireland knew was biltong was.

Noreen's husband John, a beef wholesaler, came across some at a stall at a food market in Dublin five years ago.

Noreen, who has worked alongside John in the wholesale business since they married and was previously involved in setting up start-ups around Europe, was intrigued.

She did some research and found that not only was biltong tasty, its nutritional value was "phenomenal".

"It's a really clean, healthy snack.

END_OF_DOCUMENT_TOKEN_TO_BE_REPLACED

"A 50g packet gives you more or less the same value in protein as a small chicken fillet."

She asked some contacts she had in the sporting world about it and discovered that one of our national teams was importing biltong from the UK as a snack for its players.

That was all the encouragement she needed to start working on Ireland's first native brand of biltong.

Noreen and her team spent two years perfecting their product and entered it in a number of competitions.

It first landed on shelves in Supervalu but Irish Biltong's big break came when, through a competition, the company landed a listing for all 110 Applegreen stores around Ireland.

It was great news but would mean operations would have to shift up about ten gears to meet the order.

"It was really a case of shit or get off the pot.

"We had really wanted to grow it and now there was a listing on a plate. So we took the jump.

"We have very good team who are totally on board.

"Everyone just knuckled down. It took long nights, long days and we just did it, simple as that."

Irish Biltong landed in Applegreen stores in January 2017 - and that was just the beginning of a rollercoaster period for Noreen and her team. 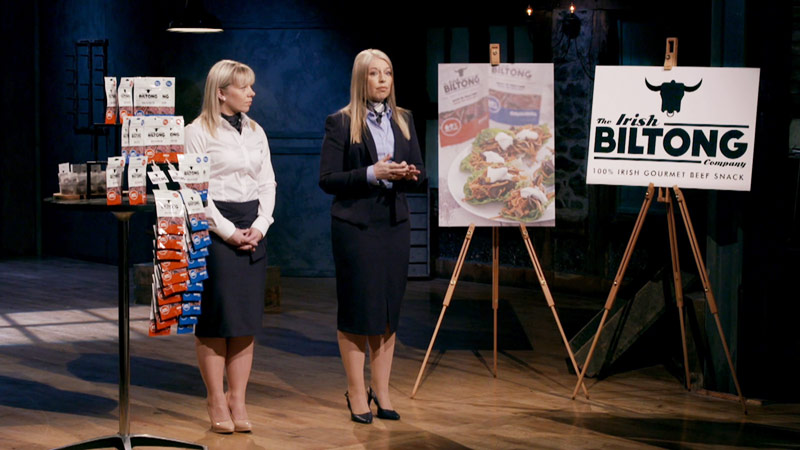 "I did (RTÉ One show) Dragon’s Den last year, we got great publicity from it.

"I turned them both down, it was too much equity. Off the back of that we got a really good private investor so we were able to upscale really quickly.

"It made us fast track and it was the best thing that ever happened to us.

"We knew it couldn’t not work so we’d have been crazy not to just jump in and do it."

"When it’s a product a customer really wants, they almost grow the business for you."

The brand's pace of growth was also spurred on by its popularity on social media.

It's a tool that's become invaluable to the business, Noreen says.

"I have to network very cleverly because I’m limited in budget," she explains.

"I would be big into customer service, I think it’s key to growing that trust between you and the customer and I find Twitter is very good for that.

"People would put up tweets about the product and that really is free advertising for me. Some of the top athletes we deal with do that."

Looking ahead, Noreen has another product in the pipeline and she's also determined to take Irish Biltong international.

"We have just started exporting and that’s where we see ourselves in the next three years.

"We started with a pilot scheme in Germany, it’s working very well and we’re working with Bord Bia on growing that.

"It’s naturally preserved so it’s got a nine month shelf life, plus it doesn’t need chilling so it travels really well. So far the feedback is really good.

"Sometimes things just take on a momentum of their own. When it’s a product a customer really wants, they almost grow the business for you."

Success in business is one thing but working with your spouse is quite another.

Noreen and John work well together because they're opposites - he's calm and cautious, she says, while she's a firebrand.

"There are arguments, there’s no doubt about that, but I pull him up, he pulls me back."

They also have their team to thank for making sure things run smoothly.

"It’s almost like a small family, everybody does everything.

"There’s no glorification of job titles in this place, you wear a different hat every day if you have to.

"The team behind you is as important as anything. It’s one thing that small businesses never take into consideration – if the shit hit the fan in the morning (in your personal life), would your business be able to take it?"

If she had one other piece of advice for other fledgling Irish businesses, it'd be to make the most of the resources that are available to start-ups.

"A lot of small businesses don’t realise the supports that are out there.

As for other women facing sexism in their industry?

"You really need to know your stuff," Noreen says.

"You need to be able to stand up there with pure confidence. It’ll come across straight away and it’ll nip any of the judgements in the bud very quickly."

Noreen is a member of WIN (Women's Inspire Network), an online group that provides support and advice for female entrepreneurs. Find out more here.

Girls With Goals || Her · Ep.160: The Beauty Of Coaching - Hayley Harrison joins us from Sport Ireland
popular
These 14 Dublin attractions are opening their doors again next week
You can now get Hyaluronic Acid at Dealz for €4
More footage of Tristan Thompson cheating on Khloe has emerged
Doctors warning young people against 'sun cream contouring' TikTok trend
Irish company launches 1.5 litre wine 'Bagnum' - a magnum in a bag
28 amazing Irish glamping spots for your 2021 staycation
Someone has ranked the penis size of men from all over the world
You may also like
2 months ago
The Westbury Hotel in Dublin is offering complimentary headshots for women in business
1 year ago
Here are all of the finalists for this year’s Women In Tech Awards
1 year ago
Nominations for this year's Women in Tech Awards are now open
2 years ago
Hear how our Girls With Goals producer Niamh Maher nabbed her current role in media
2 years ago
The one piece of advice that I heard over and over from successful Irish women this year
2 years ago
#MakeAFuss: 'You only get one shot at this' - A career coach on changing your life
Next Page