#MakeAFuss: The woman bringing the bone broth movement to Ireland

If you're a foodie, bone broth is something that's bound to be on your radar.

But this isn't just your granny's stock from the Sunday roast - it's a trend that's putting a classic ingredient at the heart of modern cooking.

END_OF_DOCUMENT_TOKEN_TO_BE_REPLACED

Or, if you're Sarah Kiely, it was originally just a way to tackle tricky digestive issues.

Sarah worked in PR and marketing for most of her twenties, a fast-paced industry with late hours that meant little time for healthy eating.

"I suffered really badly with my gut and IBS," she tells us.

"I tried an awful lot of different things to remedy it, from meditation to food elimination diets to colonic therapy.

"I was that person who’d try anything. You feel like your body is almost betraying you."

Her search for relief led her to bone broth, an old-fashioned staple that was having a resurgence in food circles in the US and UK because of its numerous health benefits (it's recommended for joint pain, gut issues, food intolerances and boosting immune systems), its low calories and high protein content.

She made some herself and found it instantly made her feel better.

'I knew there was huge potential'

The discovery sparked an idea for a business in Sarah. She began looking into selling her own bone broth and in 2015 Sadie's Kitchen was born.

Sarah knew little about the Irish food industry but seeing the popularity of bone broths abroad, she had an inkling that her range would appeal to people like her who wanted a healthy option fast.

END_OF_DOCUMENT_TOKEN_TO_BE_REPLACED

"It’s an incredibly Irish way to eat, really simplistic and wholesome," she says.

"It goes back to what my grandparents would have eaten but it’s just one of those things that we all fell out of touch with because we're all so busy, so my ethos was to bring convenience without compromise."

She did her research, created her product and hit farmer's markets and independent shops with the Sadie's Kitchen range, but it wasn't until she appeared on RTÉ show Dragon's Den last year that things really took off.

Sarah knew she had to scale up but needed funding fast to make that happen.

"I knew there was huge potential but I needed help on the strategy and financial end to make sure I didn’t run out of cash."

She found that help in Alison Cowzer, a co-founder of biscuit company East Coast Bakehouse and an investor on the show.

Alison has already come across Sarah's bone broths and saw something in the fledgling food business. 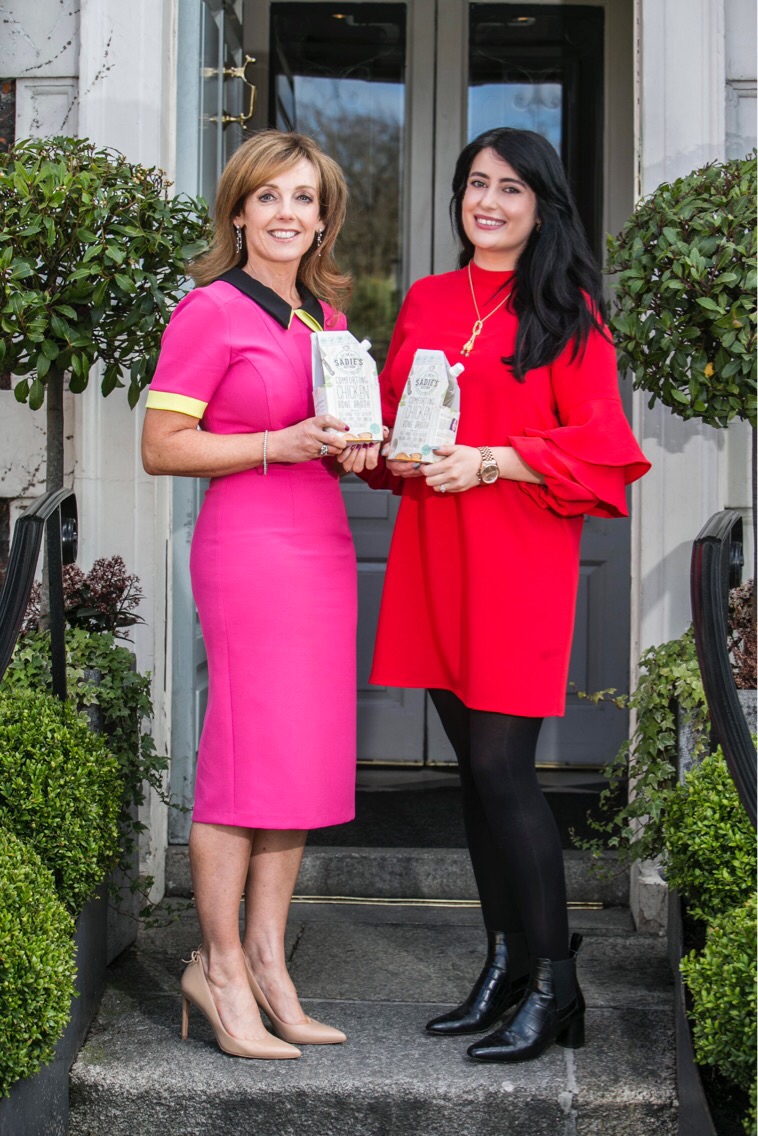 "It was one of those days where it went your way and you’re somehow able to remember your figures!," Sarah says.

"I actually forgot I was in there asking for money, I just went in and told my story."

Alison jumped at the chance to come onboard and the pair haven't looked back since.

"She’s one of the most prolific people in the Irish food industry and a real champion of Irish women in business," Sarah continues.

"She’s definitely made me look past week-to-week and look to where we’ll be in the next two years and has been a fantastic mentor.

"It goes beyond an investment with someone like that. She’s really involved."

Sadie's Kitchen has also benefited from help from organisations like Enterprise Ireland and Sarah says there's a wealth of support for new food businesses in Ireland.

"It's totally free and a massive source of mentoring and advice. Ask people who've done it before, set up one-to-ones with successful people.

"Bord Bia is great too – there you have access to a library of research that would cost tens of thousands of euro to get otherwise.

"And just get out and talk to people, go to a farmers market and see will people actually buy it – that’s how we established our price point and got the feedback to tweak our product." 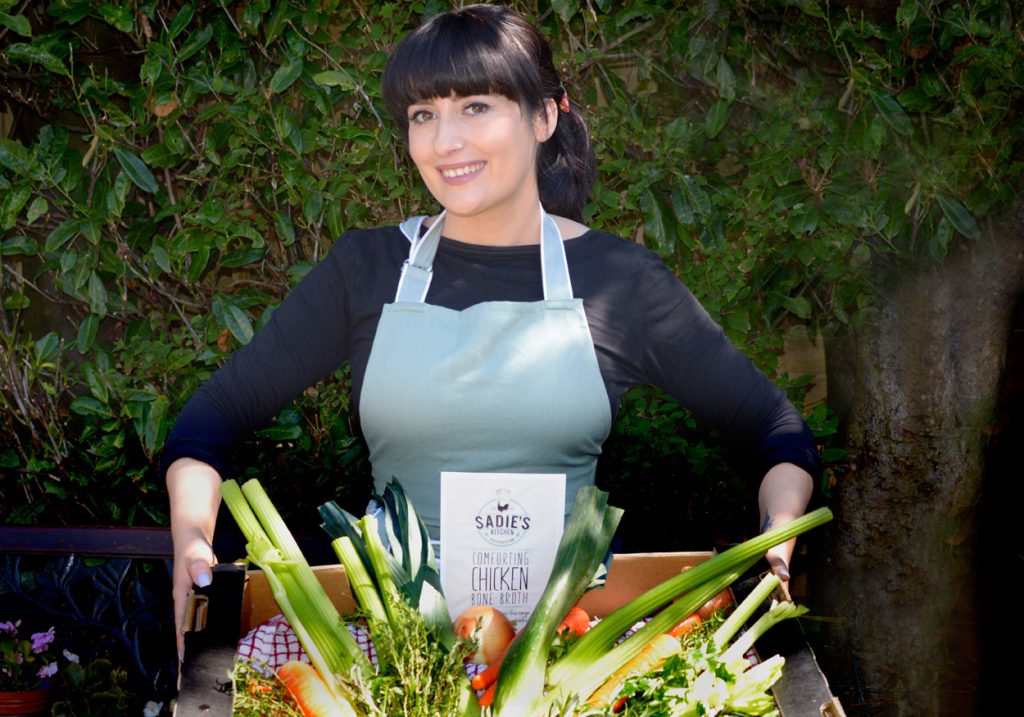 After all that, it's about putting in the hours to make your vision a reality.

"If it was easy, everybody would be doing it. Food is probably one of the hardest industries to make money in.

"You’re either made for it or you’re not. You have to be super mentally prepared for it, you’re going to be working at an unsustainable rate for three years of your life."

A taste of success

Sarah's work is slowly but surely beginning to pay off.

Sadie's Kitchen broths are now stocked in just under three hundred shops around Ireland including Dunnes Stores, SuperValu and independent retailers and are also exported to the North.

Sarah plans to launch in the UK soon and is looking into some European markets.

The company has become an ambassador for appliances brand Neff and recently announced a partnership with Freshly Chopped, bringing hot meals to its stores for the first time.

We can also expect to see a range of Sadie's Kitchen ready meals in the near future.

This growth reflects the fact that people are getting on board with the products, according to Sarah.

"We created a category ourselves - when we first launched two years ago, people didn’t even know where to put us," she tells us.

"But when people pick up the packet, they see they can use it as a stock and as a hot sipping drink and that it's a natural source collagen and everything so we’ve made huge in terms of the understanding around it.

"It was seen as very artisan, very niche and now it's in the the big supermarkets. It just comes back to convenience – life is too short to be boiling bones 12 hours a day."

As for Sarah's own favourite ways to eat bone broth?

"One of my favourite things to eat in the world is a thing called Italian wedding soup with chicken or turkey meatballs. I grew up on it as a kid.

"I love fermented foods too - my gut just screams at me for surkraut and kimchi! I’m naturally drawn to gut-balancing foods."

Know a kickass woman in business? Get in touch with us via anna@her.ie.

Girls With Goals || Her · Ep.161: Feeling Peachy - Sharon Keegan of Peachylean on being an absolute BOSS!
popular
The DIY frozen coffee recipe that's so delicious you'll never pay for an iced latte again
Wayne and Coleen Rooney spotted holidaying in Ireland
You can now stay in the original Spice Girls bus on AirBnB
Khloe Kardashian has JUST confirmed she is pregnant
Vicky Phelan rethinking cancer trial after "horrendous" reaction to treatment
"There is a difference": Holly Willoughby calls out porn director's view of "normal" sex
Woman who gave birth to 10 babies speaks out following fraud claims by partner
You may also like
1 week ago
"I am a sleep enthusiast!" Meet Hannah Murphy – the woman behind ethical Irish bedding company Amurelle
3 months ago
The Westbury Hotel in Dublin is offering complimentary headshots for women in business
1 year ago
Here are all of the finalists for this year’s Women In Tech Awards
1 year ago
Nominations for this year's Women in Tech Awards are now open
2 years ago
Hear how our Girls With Goals producer Niamh Maher nabbed her current role in media
2 years ago
The one piece of advice that I heard over and over from successful Irish women this year
Next Page