Apple are hardly one to stray away from controversy but this app has proved too much for them.

The aim of the game is to simulate a female orgasm and it was developed by Copenhagen-based Lovable Hat Cult. And while the object of the game might be sexual, the images are heavily colourized and pixelated. 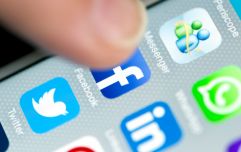 END_OF_DOCUMENT_TOKEN_TO_BE_REPLACED

According to Mashable, "gameplay" consist of dragging your finger slowly around the screen, guided by musical sound effects.

There are no points or levels but players are unable to unlock various "experiences" based on their movements.

"Our game should not be regarded as an educational game about pleasuring vulvas," Jarnfelt writes.

The below video shows the game in action. Let us know what you think.

Girls With Goals || Her · Ep.151: 'A Story Shared' - Aoife P. Rafter on blogging during a pandemic and living with CF
popular
"I tried to imagine how we’d heal:" Meghan Markle discusses miscarriage in candid opinion piece
Princess Diana's brother isn't happy with The Crown's depiction of his sister's marriage
Camilla receiving online abuse following The Crown's depiction of Prince Charles affair
Zoe Alexander Says X Factor Made Her Look Like a 'Fool'
AOC weighs in on Harry Styles' Vogue cover, says he looks "bomb"
Season two of Virgin River lands on Netflix this Friday
"I don’t know where I’d be without her:" Paul Mescal chats new girlfriend in candid new interview
You may also like
3 weeks ago
Baby Shark has just become the most watched YouTube video EVER
1 month ago
Forget coffee – whipped strawberry milk the new viral drink trend your life needs
2 months ago
"Cancel Netflix" trending after new movie that "sexualises children"
4 months ago
Quarantine Barbie: She exists and she's far too real
5 months ago
Here's how to make a vegan 'fried egg', according to an Australian food blogger
6 months ago
Kids have been applying to 'work from home' with their dogs during lockdown and nah, too much
Next Page