Yesterday was Mother's Day in the US, which explains why social media feeds were flooded with people sharing touching tributes to the inspirational women in their lives.

While many users posted sweet photos of their own mothers and grandmothers, many men shared their gratitude for the mothers of their children. 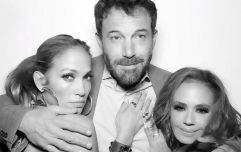 END_OF_DOCUMENT_TOKEN_TO_BE_REPLACED

The couple were married in 2005, but separated ten years later. Their divorce was finalised in 2018.

They have three children together - Violet Anne, Seraphina Rose and Samuel Garner.

On Instagram, Affleck shared 5 photos of Jennifer with their children, as well as a sweet video of the actress telling her family that she'd "be home for bedtime".

In his caption, Ben wrote: 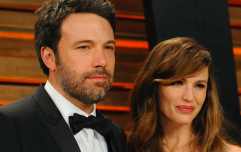 END_OF_DOCUMENT_TOKEN_TO_BE_REPLACED

"Luckiest parents in the world. Thanks for all the good you do.

In the comments, Affleck was praised by his fans. Several Instagram users said that his attitude demonstrated "co-parenting at its best". 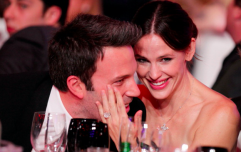 END_OF_DOCUMENT_TOKEN_TO_BE_REPLACED

Another said: "No matter what happened, you all are family."

Jennifer Garner has only spoken amicably about Affleck since their split.

In an interview with Vanity Fair, Garner praised Ben's role as a father.

"The main thing is these kids," she said. "And we're completely in line with what we hope for them."

She continued: "Sure, I lost the dream of dancing with my husband at my daughter's wedding. But you should see their faces when he walks through the door. And if you see your kids love someone so purely and wholly, then you're going to be friends with that person."

popular
Mother charged with murder of three children in New Zealand
Dublin nurse scammed out of all her savings warns others
Derry Girls star speaks out after show called "distinctively British"
Maura Higgins reveals NTA ordeal after man tried pulling her into a car
The 'secret' Zara label signs that'll apparently help you get the right size every time
Bruce Springsteen expected to play Cork and Dublin next year
Waterford man jailed for six months for sexual abuse of niece
You may also like
1 month ago
Jennifer Lopez just shared a steamy snap of herself and Ben Affleck – and WOW
1 month ago
WATCH: The first trailer for The Last Duel, the epic film Matt Damon made in Ireland
2 years ago
Jennifer Garner has moved on from Ben Affleck with this 40-year-old CEO
2 years ago
Ben Affleck makes a statement after finishing his time in rehab
3 years ago
Ben Affleck checks into rehab after ex-wife Jennifer Garner holds intervention
3 years ago
Jennifer Garner's touching tribute to ex Ben Affleck for Father's Day
Next Page