Britney Spears took to Instagram this evening to share the happy news that she's expecting her third child. The 40-year-old shared an image of pink flowers alongside a gushing caption which you can read in full below: END_OF_DOCUMENT_TOKEN_TO_BE_REPLACED

In the post, the legendary singer explained how at first she and her partner, Sam Asghari, thought it was a food baby before a pregnancy test cleared it up for good, "My husband said, no you're food pregnant silly! So, I got a pregnancy test and well... I am having a baby!" 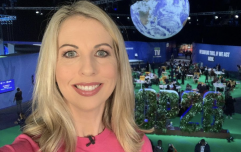 END_OF_DOCUMENT_TOKEN_TO_BE_REPLACED

The singer also reminisced on her previous pregnancies revealing that she suffered from perinatal depression in the past, "Women didn't talk about it back then, but now women talk about it every day." Britney already shares two sons with her ex-husband Kevin Federline.

Fans have rushed to the comment section to congratulate Britney with the post already receiving thousands of comments.