''I ripped open some wounds that had been healing for some time.''

Anyone who's seen the first Guardians of the Galaxy film knows that it's both funny and heartwarming.

It seems that the second one is set to be just as special. 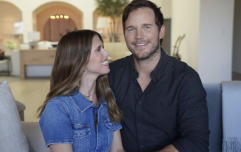 END_OF_DOCUMENT_TOKEN_TO_BE_REPLACED

Chris Pratt recently spoke to GQ about the his anticipation for the upcoming sequel.

He also added that the film helped him deal with the passing of his father Dan.

Although Chris' dad died in 2014 from multiple sclerosis, he said that it was only while he was in the process of making Guardians of the Galaxy Vol 2.

“The truth is I ripped open some wounds that had been healing for some time. And I didn’t want to. But I knew it was right for the moment,” he told British GQ.

He added that while you never get over the death of a parent, the film helped him to acknowledge it.

“There are wounds that are never going to be totally healed. It would probably make for a better story if it was some emotional thing that I hadn’t dealt with ... When we face the death of a parent, you sometimes feel regret that you didn’t fully embrace what you had.” He said.