David Beckham thanks women's football team for inspiring his daughter

"I know that there's one person who is really excited to see it, and that is my daughter Harper."

The team, who are known as the Lionesses, defeated Sweden last night with a score of 4-0, which secured their place in the Euro 2022 final. 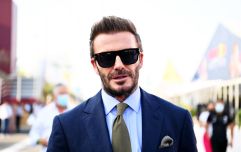 END_OF_DOCUMENT_TOKEN_TO_BE_REPLACED

In the final, the English squad will take on either France or Germany, who face each other today in Milton Keynes. The four goals were scored by Beth Mead, Lucy Bronze, Alessia Russo and Fran Kirby. The game marked the first time the women's team secured their place in a major final since 2009.

Wishing the team luck in a video shared on social media, Beckham spoke about how his daughter was inspired watching them.

END_OF_DOCUMENT_TOKEN_TO_BE_REPLACED

"Congratulations on an incredible tournament so far," David said. "It's been so uplifting, it's been so exciting and it's been so inspiring.

"And for me personally, you know, I have a daughter, so for her to be inspired by you girls and your performances has been incredible."

He continued: "But it's not just the girls that are getting inspired, the boys are getting inspired as well by this and we all know that when big tournaments come around our country and our fans get behind us like no other, so it's been incredible to see the performances but me personally, the game against Spain is really what brings the nation together, so to win a game like that in that manner, it really has uplifted the whole country.

popular
Here are the baby name trends set to dominate 2023
Here is the reported I'm A Celeb All Stars line-up
Hailey Bieber shuts down rumours she dated Justin while he was with Selena Gomez
Two Love Island 2022 stars have just become step siblings...
Irish twins featured by Gucci during Milan Fashion Week
5 delicious brunch spots around Ireland to try out on your next trip with the girls
ITV boss defends Phil and Holly once more
You may also like
6 months ago
David Beckham hands over his 71 million followers to Ukrainian doctor
2 years ago
Courteney Cox and David Beckham are sharing a hot tub, and other things you definitely needed to see today
2 years ago
Brooklyn Beckham reportedly dating actress Phoebe Torrance after split from Hana Cross
2 years ago
Victoria Beckham shares how she makes her marriage work with David
3 years ago
'Please stop growing up': David Beckham shares sweet message as Harper turns 8
3 years ago
20 years on: David and Victoria Beckham share ultimate throwback to mark their anniversary
Next Page