Elizabeth Hurley has spoken out this week at her anger at being unable to help her grandmother who died of breast cancer.

The actress, who is a global ambassador for the Estee Lauder Breast Cancer Awareness Campaign, spoke about how her grandmother showed  scars from a double mastectomy but had changed the subject.

“At that time, there was so little written about breast cancer,” she told The Times. “It wasn’t until I started to learn about breast cancer through Evelyn Lauder that I began to feel so angry that I hadn’t known more at the time, when perhaps I could have helped her. 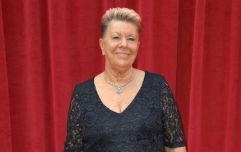 END_OF_DOCUMENT_TOKEN_TO_BE_REPLACED

“We know that if a cancer is found and treated early, there is a 95% chance of recovery,” she continued. “If only my grandmother and countless other scared woman could have known this.”

Hurley was speaking ahead of Breast Cancer Awareness Month. Her grandmother died in 1992.

Her comments come in the wake of television presenter Michaela Strachan revealing that she had been diagnosed with the disease.

She told the Mail on Sunday magazine that she was forced to have both of her breasts removed.

“The tears started to roll as my doctor tried to tell me what would happen next,  but I only took in every fifth word or so. The only word that registered was ‘cancer’,” she said.

popular
Actress Regina King pays tribute to her son as he dies suddenly
FBI reveal that Brian Laundrie is responsible for Gabby Petito's death as they discover notebook
Lisa Fallon praised as she opens up about terrifying ordeal on Late Late
A documentary about two Irish boys who skipped school to go to New York is coming soon
People are only realising Kendall Jenner and Gigi Hadid are related and the reactions are gas
Ben Foden explains why he called Rachel Stevens "sexiest woman alive"
And Just Like That... episode 8: Nobody saw this one coming
You may also like
1 month ago
Eastenders to shed light on male breast cancer in upcoming storyline
2 months ago
Viewers emotional over 'heartbreaking' Keelin Shanley documentary
2 months ago
The viral photo that can help women detect early signs of breast cancer
3 months ago
A live virtual breast check is happening this week
3 months ago
Shirley Ballas books breast exam after Strictly viewers spot lump
3 months ago
Breast cancer survivor Tracy Bennett wants to raise awareness for "sneaky" type of cancer
Next Page