It's well-known information that Katie Hopkins is an absolute WAGON.

She's had spats with an endless string of celebrities and her next target appears to be our fave presenter - Angela Scanlon.

Scanlon, a stylist and presenter originally hailing from Ratoath, Co. Meath has successfully hosted a string of programmes including OI! Ginger, Angela Scanlon:Full Frontal, and recently scored herself a show on Virgin Radio with UK comedian, Russell Kane. 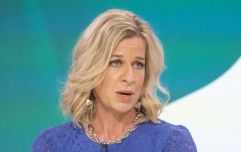 Katie Hopkins has collapsed in South Africa after taking ketamine

END_OF_DOCUMENT_TOKEN_TO_BE_REPLACED

Another project she has a hand in presenting is BBC 3's Angela Scanlon's Close Encounters and on the latest episode, she has a serious time keeping her cool with British journalist Hopkins, who revels in the fact she is known as 'Britain's Biggest Bitch'.

In the clip, Hopkins is seen to describe herself as the "Jesus of the outspoken" and is extremely rude towards Irish people and Scanlon, who sits right in front of her.

Like a brainwashed prophet, Hopkins insists, "I think it's important that I spread my messages whilst I'm still here on earth and one of those messages could be, never wear a legging," before asking whether or not we have Marks & Spencers in Ireland.

Ever the professional, Scanlon coolly replies: "Yes, we do.  We also have electricity."

Hopkins goes on to prod a clearly unimpressed Scanlon with stupid Irish stereotypes, calling us "almost civilised" and branding us potato-lovers.

Yawn. Seriously, Katie? Couldn't you come up with anything better?