The reality star, who is married to Spencer Pratt, is currently appearing on Marriage Bootcamp and used the opportunity to re-ignite her feud with former BFF.

The pair famously fell out when Conrad accused Montag and Pratt of spreading false rumours that she had made a sex tape with ex-boyfriend Jason Wahler and when asked to try and let go of something someone has done to hurt in her past, the 28-year-old said that she was "the angriest" at the fashion designer.

"She's my former best friend she just tried to ruin her life with her lies. I definitely feel the weight of the emotional baggage that I carry from this person and I'm sick of it."

END_OF_DOCUMENT_TOKEN_TO_BE_REPLACED

Montag then pretended that she was addressing Conrad, unleashing a bitter string of insults.

"I am so mad at you for feeling like, because you put me on TV, I was indentured to you for everything. I am so mad at you, how awful you treated me. You think you're America's sweetheart? You had your sex tape and you blamed it all on me!" 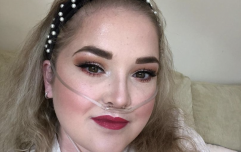 END_OF_DOCUMENT_TOKEN_TO_BE_REPLACED

popular
Ekin-Su Cülcüloğlu signs the biggest fashion deal in Love Island history
Love Island producers respond to claims Jacques was kicked off the show for "bullying"
Met Éireann extends high temperature warning for Ireland this weekend
Lisa Kudrow addresses lack of diversity on Friends
Five teenage girls in hospital after Kilkenny crash
Love Island's Amber opens up on unaired fight between Remi and Jacques
Andrew Le Page explains why he unfollowed Jacques O'Neill
You may also like
3 weeks ago
Love Island producers to launch middle-aged spin-off for Mums and Dads looking for romance
1 month ago
Love Island's Gemma finally tells villa about dad Michael Owen on TV
2 months ago
The six Eurovision countries with "irregular voting patterns" have been revealed
6 months ago
The Late Late Show is looking for couples and singles for its Valentine's Special
7 months ago
WATCH: The trailer for the final season of Peaky Blinders is here
7 months ago
Britain's Got Talent star David Watson reportedly dies aged 62
Next Page