Influencer criticised for "identifying as Korean" after eye surgery

Many felt that Oli's identity as "transracial" is damaging to Korean people, as well as those who are trans and non-binary.

A white, English influencer has attracted criticism for "coming out" as Korean after undergoing numerous surgeries to resemble Jimin, a member of the K-pop boyband BTS.

Oli London announced that they were transraacial as they recovered from eye surgery, a face-lift, a brow-lift and a temple lift.

END_OF_DOCUMENT_TOKEN_TO_BE_REPLACED

They continued: "I identify with the culture, I’ve lived in Korea, I speak the language, I have the Korean look now, I look completely Korean."

In a post on Instagram, Oli outlined how they decided to "come out" as Korean in order to help "millions of others LGBTQI+ young people around the world, Kpop fans and the Korean people feel confident enough to be able to feel no fear to be able to express themselves and how they identify."

Since then, the influencer has come under fire for their remarks, which fetishise Asian and Korean people. 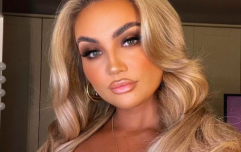 END_OF_DOCUMENT_TOKEN_TO_BE_REPLACED

On Twitter, one person wrote: "It's not funny, and will never be funny. He literally got eye surgery to make his eyes "more Asian", and uses his platform to disrespect, infantilize and fetishize Asians on a daily basis. Racism is not a joke."

Another wrote that it was the "ultimate cultural appropriation".

"A lot of people generally are struggling to accept themselves sometimes because of the society," one person wrote. "And yet oli london is saying it like it's a joke."

popular
Netflix's true crime series Sins of our Mother is seriously insane
So, William and Harry have a step sister... and who knew?
Why Are Men so Obsessed With Boobs? The Answer is Pretty Surprising...
Singer Ciara cancelled her wedding over transphobic laws
Gwen Stefani reportedly pregnant with baby number four
This is the easiest way to determine you may have VIKING heritage
Body language expert says Meghan and Harry were having a row at Eugenie's wedding
You may also like
6 months ago
Katja Mia: "I'm thriving in just being who I am"
8 months ago
Are we finally witnessing the end of hustle culture?
9 months ago
Molly Mae Hague likes being a "loner" and isn't bothered about having friends
9 months ago
Maeve Madden shares beautiful photos from wedding day
11 months ago
Influencer charged with drugs trafficking after trying to board Dubai flight with cocaine
11 months ago
Molly Mae Hague reveals she had surgery to remove lump from breast
Next Page