Jennifer Lawrence and her fiancé Cooke Maroney are getting married tomorrow - and it sounds absolutely incredible.

The couple, who have been engaged since February, sparked wedding rumours after they were spotted at a New York City courthouse last month.

However, according to PEOPLE, the pair are actually going to say 'I do' tomorrow [October 19] in front of their family and friends at the Belcourt of Newport estate in Newport, Rhode Island. 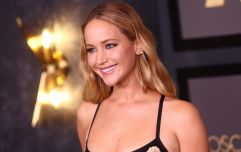 END_OF_DOCUMENT_TOKEN_TO_BE_REPLACED

And TMZ report the couple went all-out for the wedding, which is said to feature 150 guests and a mouth-watering menu which - among many, many other things - features s'mores.

The Silver Linings Playbook actress recently admitted that marriage hadn't been on her mind until she met Maroney.

She also confirmed that when they do tie the knot, she would be taking her fiancé's last name.

Speaking on the NAKED with Catt Sadler podcast, she said:

“I want to legally bind him to me forever and, fortunately, the paperwork exists for such a thing.

“It’s the greatest. You find your favorite person on the planet, you’re like, ‘You can’t leave.’ So, I wanted to take up on that offer."

It is thought that the pair started dating in June 2018.

popular
Baby dies next to mother who drank 'two or three' bottles of wine then fell asleep
Little boy dies of cancer after doctors ignored mother's warnings six times
Love Island's Zara's brother reveals the real beef going on between her and Olivia
Funeral of Cork toddler takes place after choking accident
Gwen Stefani reportedly pregnant with baby number four
Abigail Breslin marries longtime love Ira Kunyansky
Molly Mae: "Thank you for entering this world safely for us"
You may also like
11 months ago
Actress Jennifer Lawrence welcomes her first child
1 year ago
Don't Look Up mirrors our reality - and the future is bleak
2 years ago
Jennifer Lawrence is set to star in a new sci-fi comedy for Netflix
3 years ago
Jennifer Lawrence and fiancé Cooke Maroney spark wedding rumours as they are spotted at New York courthouse
3 years ago
Jennifer Lawrence wore a pink wedding dress to her engagement party because of course
3 years ago
Adele and Jennifer Lawrence had the best night ever at a gay bar last night
Next Page