Keith Duffy Receives Honorary Fellowship For His Work With Autism

Keith Duffy has been awarded an Honorary Fellowship from the Royal College of Surgeons (RCSI) as recognition for the work he has done for children with autism.

The Boyzone singer has been fundraising and increasing awareness of autism in Ireland for a number of years. He became a patron for Irish Autism Action in 2001 and has helped raise nearly €4 million for children and their families since.

“I recommend Mr Keith Duffy for the highest honour this Faculty can bestow for his work as an outstanding advocate for children with autism and their families,” said Catherine Clune Mulvaney, Honorary Secretary of the RSCI Faculty of Nursing and Midwifery. 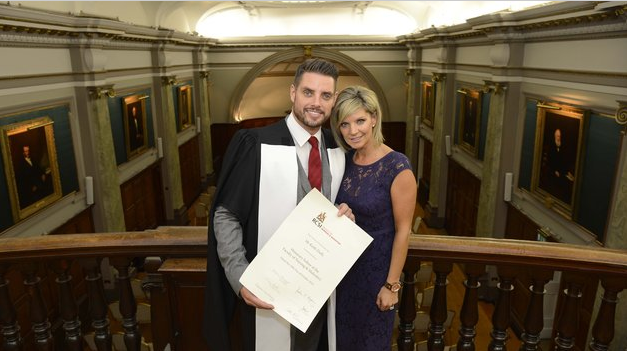 Keith pictured with his wife Lisa at the ceremony. (Pic: RCSI.ie)

“Keith continues to inspire families and provide hope for those who are faced with thte initial shock of an autism diagnosis, by raising awareness about autism in the public domain and highlighting the need for early intervention, appropriate education and care for children with autism.

The Honorary Fellowship was conferred at a special ceremony this week.

Keith also previously received the Rehab Person of The Year award in 2008 and the 2013 Philanthropist of the Year award.

popular
Will Smith admits to 'failing miserably' in 21-year marriage to Jada Pinkett Smith
QUIZ: Can you guess the TV series from the intro lyrics?
Someone has ranked the penis size of men from all over the world
Glee Star Naya Rivera Faces Backlash After Making ‘Race’ Joke
Eight Of The Best Films And Documentaries On 9/11
So, William and Harry have a step sister... and who knew?
Gwen Stefani reportedly pregnant with baby number four
You may also like
1 month ago
We are obsessed with these stunning local handmade soap bars by Little Village Soaps
6 months ago
Ones to watch: Eight rising Irish music stars to fangirl this year
6 months ago
8 things that happen in EVERY Irish household on Christmas Day
6 months ago
Waterford singer Moncrieff is making waves in London and even Elton John is listening
7 months ago
Hygge vibes: 5 gorgeous candles worth splurging on this Christmas
7 months ago
"Pinch me!" Irish songwriter Ruthanne Cunningham is floored by Grammy nomination
Next Page