Kim Kardashian West has shared a sweet selfie with her 6-month-old daughter, Chicago, as she revealed the tot's middle name.

The mum-of-three posted a picture with her youngest daughter on Instagram, which she captioned: "Chi Noel."

Fans were quick to pick up on the sweet inspiration in the comments on the post.

It turns out that while she may not have given her eldest children, North and Saint, a middle name, Kim wanted to change things up with her youngest.

The reality TV star's full birth name is Kimberly Noel Kardashian, which she legally changed (dropping the Noel) when she married Kanye.

But it appears as if she wanted to pass on the moniker to one of her children - and fans thought it was adorable.

"She has your name as a middle name so cute!"

"Wait she is the first to have a middle name and its your middle name omg so dope love it." 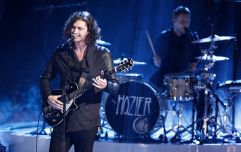 END_OF_DOCUMENT_TOKEN_TO_BE_REPLACED

The middle name is likely to be more of a recent addition, as her birth certificate said that she didn't have one at first.

It comes as Kim shared the reasoning behind Chicago's unusual moniker, admitting that she actually wanted to call her Grace or Jo.

She said on the Ellen DeGeneres Show:

"I don't even know how the name, I mean obviously because he's from Chicago, but that is a place that made him."

popular
Here are all the Instagram accounts of the stars of Netflix's Cheer
A celebrity hairstylist just shared a genius hack for the perfect messy bun
16 and Pregnant star Jordan Cashmyer dies aged 26
Coming to terms with the fact that you're a Charlotte
Irish in Sydney shaken by Ashling Murphy murder
Someone has ranked the penis size of men from all over the world
Gardaí seize two cars linked to Ashling Murphy death as they question new suspect
You may also like
2 weeks ago
Woman tests positive for Covid mid-flight, isolates for 5 hours in bathroom
4 months ago
Judge orders mother can't see her son until she's vaccinated
3 years ago
Schoolgirls 'bleeding through clothes' due to strict school bathroom policy
4 years ago
Text while you walk? In this city you could be fined for it soon
4 years ago
Police investigate criminal damage after Irish J1 house party in Chicago
4 years ago
The first EVER official Nutella café is opening this month
Next Page