When you upset one sister, you hurt them all.

And that's evident from the latest scandal to hit the Kar-Jenners which saw Khloe Kardashian's baby daddy, Tristan Thompson, cheat on the star with none other than Kylie Jenner's best friend and housemate, Jordyn Woods.

Jordyn Woods has been a close family friend for years, working with all the sisters especially Kylie and Khloe on makeup and jean collaborations but now, it appears as though all those bridges are firmly burned with most of the sisters unfollowing Jordyn in the aftermath of the scandal. 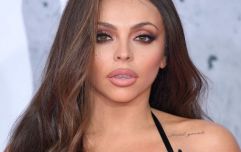 END_OF_DOCUMENT_TOKEN_TO_BE_REPLACED

It has been confirmed that Khloe and Tristan have now split, Khloe has returned to the public eye and it appears as though each sister is taking it in turns to have their say, even in the most subtle way.

Last night, Kourtney Kardashian took to Instagram for the first time since the news broke, sharing a photo of herself wearing a diamond snake necklace with the caption "diamonds are a girl's best friend".

After Jordyn's photos were ambushed with snake emojis underneath her photos, fans believed that Kourtney was too calling the plus size model a snake and they were enjoying her jibe at the 21-year-old.

"Snake plus bestfriend = we see you!"

"Oh, Jordyn, I didn't recognise you around Kourtney's neck!"

And so, the comments continue.

Jordyn spoke about the controversy last night, giving the most weak statemen that again, sent fans into a rage - you can check that out here.

Girls With Goals || Her · Ep.155: 'Bits of Me' - Linnea Dunne on the importance of women's health
popular
Two elderly men found dead as Gardaí "urgently" search for red van in Cork
Scarlett Moffatt discovers ‘30% rain’ on weather app doesn’t mean chance of rain
Anne Hegarty shook by "worst ever" final Chase
Princess Anne: Harry and Meghan were right to quit royal duties
Met Éireann predicts dry, bright, and sunny weekend
Lady Gaga's dog walker shot as her two dogs are stolen
Jesy Nelson "mentally bullied" herself during Little Mix years
You may also like
2 days ago
Ellie Goulding announces first pregnancy
3 days ago
Celebrity conservatorships: What they mean, and who else has had one
1 week ago
Kendall Jenner accused of cultural appropriation over new tequila business
1 week ago
Caroline Flack anniversary: Where are we now, one year since #BeKind?
2 weeks ago
Britney taking time "to be a normal person" after Framing Britney Spears documentary
2 weeks ago
Britney Spears' boyfriend thanks fans for support after release of documentary
Next Page