When will we learn to stop equating thinness with health/happiness?

Lena Dunham has hit back at body shamers who criticised her appearance in her wedding photos.

The 35-year-old recently tied the knot with her long-term boyfriend Luis Felber. After sharing a snap from their wedding day, many fans expressed their well-wishes to the couple. However, numerous trolls also chimed in, leaving hateful comments about Lena's appearance.

The actress posted a selfie on Instagram on Wednesday accompanied by a lengthy caption addressing the recent harassment she had received.

"It’s a little too easy to feel the glow of support and forget about the cesspool lurking behind it – so I took a peek, and saw some gnarly s**t, most not worth responding to or even sharing with you," she said. 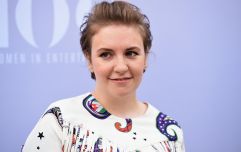 Lena Dunham Calls Out Spanish Magazine For Photoshopping Her Body

END_OF_DOCUMENT_TOKEN_TO_BE_REPLACED

"But one narrative I take issue with, largely because it's a story I don't want other women, other people, to get lodged in their heads is that I should somehow be ashamed because my body has changed since I was last on television."

Lena went on to address some of the hurtful comments and criticise the comparisons between her body then and now.

"Firstly ‘Did Lena eat the cast of Girls’ just isn't a very good joke," she said. “Secondly, it's ironic to have my body compared to a body that was also the subject of public scorn- an echo chamber of body shaming.

"When will we learn to stop equating thinness with health/happiness? Of course weight loss can be the result of positive change in habits, but guess what? So can weight gain. The pics I’m being compared to are from when I was in active addiction with undiagnosed illness.

"These changes have allowed me to be the kind of sister/friend/daughter that I want to be and yes- meet my husband (who, by the way, doesn't recognise me in those old photos because he sees how dimmed my light was.)

"I say this for any other person whose appearance has been changed with time, illness or circumstance-it's okay to live in your present body without treating it as transitional. I am, and I'm really enjoying it.”
Advertisement
We couldn't agree more!

popular
Husband demands divorce after wife changes baby's name behind his back
Traditional names such as Mary, Maureen, John and Michael may soon be extinct
Deborah James "scared to go to sleep" as she receives hospice care
Wagatha Christie: Rebekah Vardy storms out of court just 30 minutes into final day
Irish mum shares "harrowing" experience after kids almost abducted in Turkey
Tributes paid after Love/Hate actor Stephen Clinch dies aged 52
Wait, is Maura Higgins in a new relationship?
You may also like
3 weeks ago
A look back at Girls 10 years on - and why it would never be made today
2 years ago
6 top tips for hosting the ultimate evening drinks before your Christmas night out
2 years ago
Grab the gals because we have just found our new favourite spa weekend spot
3 years ago
10 quotes to remind you you're incredible on International Women's Day
3 years ago
The Stella Theatre is showing one of our FAVE 90s movies over brunch next month
4 years ago
This Dublin cinema is hosting the ultimate Galentine's Day
Next Page