Brett Staniland, who competed on last year's Love Island, has called out the fast-fashion retailer PrettyLittleThing for using the name, popularity and image of Indiyah Polack for engagement, and then offering a brand partnership to Gemma Owen.

Brett made the comments on an Instagram post by The Shade Borough, which contained screenshots of a post by PLT asking fans to retweet a picture if they think Indiyah would be "the perfect PLT Doll". Another post asking fans to do the same for Gemma got significantly less retweets. 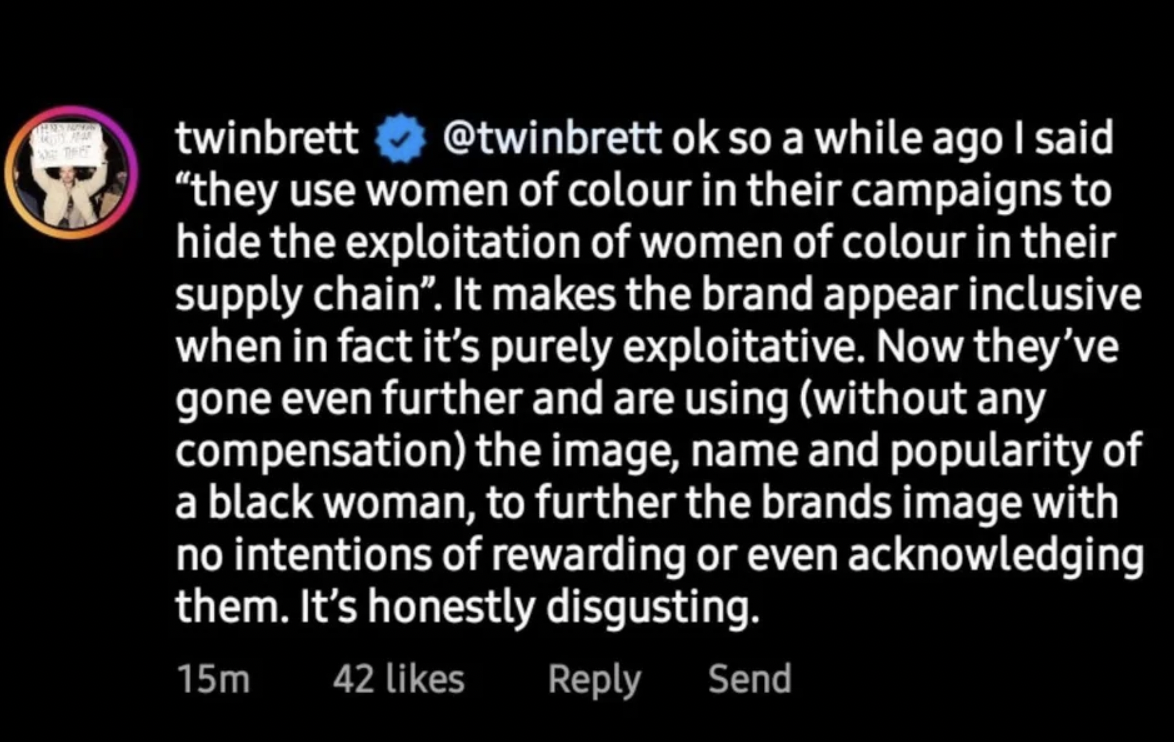 END_OF_DOCUMENT_TOKEN_TO_BE_REPLACED

"It makes the brand appear inclusive when in fact it's purely exploitative. Now they've gone even further and are using (without any compensation) the image, name and popularity of a Black woman, to further the brands image with no intentions of rewarding or even acknowledging them. It's honestly disgusting."

On Twitter, he also commented on the matter, writing: "Fast fashion brands aren't using influencers and celebrities as ambassadors to show working class or poor people somewhere affordable to shop.

"They use them to convince people who have the money, to massively over-consume impossibly cheap clothing."

Let’s get one thing straight.

They use them to convince people who have the money, to massively over-consume impossibly cheap clothing

Brett has long been calling out the practices of fast-fashion, and earlier this year, he staged a protest outside fellow Love Island alumni Molly-Mae Hague's fashion show for PrettyLittleThing.

END_OF_DOCUMENT_TOKEN_TO_BE_REPLACED

Molly-Mae held the event at the Londoner Hotel where she showed off her latest collection. Alongside other protesters, Brett held a sign which read "There's nothing pretty about wage theft."

At the time, he told OK! Magazine: "The fashion industry doesn't get taken seriously with the climate crisis. Boohoo Group don't care about anyone, and they contribute more to the crisis than any other fashion brand in the UK."

popular
He may be a politician, but Leo Varadkar's personal life is none of our business
Fans are feeling seriously sorry for Molly Mae Hague after resurfaced interview
Kelsey Parker: "People think I should be walking around wearing my black veil"
"I slept with your fella": Vogue speaks out about ex's cheating
Parents told to stop buying selection boxes for kids- here's why
Woman hit by rollercoaster wakes from coma after two months
Dundalk restaurant offer free Christmas dinner to those in need for third year running
You may also like
16 hours ago
Love Island 2023 return finally unveiled - and it's just weeks away
2 weeks ago
Love Island stars rush to support Luca Bish after his split from Gemma Owen
2 weeks ago
Luca Bish addresses Gemma Owen breakup
3 weeks ago
Dami Hope and Indiyah Polack set to move in together
3 weeks ago
Adam Collard addresses *that* viral video again
4 weeks ago
Olivia Attwood 'heartbroken' after quitting I'm a Celeb
Next Page