Love Island's Chloe Burrows and Toby Aromolaran have broken up

The Love Island couple has called it quits.

According to The Mirror, the pair ended things earlier this month. 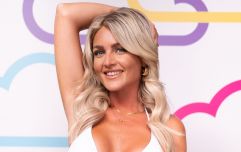 END_OF_DOCUMENT_TOKEN_TO_BE_REPLACED

The couple came in second place in the 2021 series of Love Island.

Chloe Burrows has reportedly flown out to Morocco for a girls tip with co-star Mille Court.

Chloe and Toby had been living in Essex together, but are reportedly in the middle of moving out of their shared home.

Earlier this year, The Sun reported that the couple was having relationship problems.

A source revealed, “Chloe and Toby really love each other but their relationship has come under some strain in recent weeks."

“They are both really busy with work, so they haven’t seen as much of each other, and there is the added pressure of transferring a reality TV romance into everyday life.

END_OF_DOCUMENT_TOKEN_TO_BE_REPLACED

"It’s not easy. They are still talking regularly and hoping to work things out.

"It’s encouraging that they are communicating and who knows, perhaps taking a bit of time apart will make them much stronger in the end?”

“Only time will tell, but neither of them wants to admit defeat. They don’t want people to see their romance as another reality TV casualty, because they’ve always been the real deal as a couple."

Chloe and Toby have yet to address the break-up rumours.

popular
Bride asks for divorce day after wedding following groom's disrespectful cake stunt
Molly Mae shuts down backlash over her baby girl's name
Expert team end search for Nicola Bulley declaring she’s not in the water
Emma Pattison made distressed call to her sister before murder-suicide
Madonna calls out "ageism and misogyny" following Grammys appearance
Natalie Imbruglia's Torn is actually a cover and the original just isn't the same
We finally know what date Casa Amor will hit our screens
You may also like
17 hours ago
We finally know what date Casa Amor will hit our screens
19 hours ago
Love Island first look: Claudia makes her mark as they get a surprise text
2 days ago
Love Island fans are calling for Ron to be dumped after accusing him of "gaslighting" Lana
4 days ago
Love Islanders are only allowed 2 drinks per night - here’s why
4 days ago
Love Island's Jay Younger says there's a secret and endless supply of snacks in the villa
4 days ago
Does how late you enter the Love Island villa affect your chances? A super scientific study
Next Page