No ‘Blurred Lines’ to Stardom - Model Joins the Cast of Entourage

Taking to her Instagram account, model Emily confirmed she will be amongst the cast line-up adapting the popular TV series Entourage to a feature film, with series' stars Jeremy Piven and Adrian Grenier reprising their roles. The film is due for release in June 2015.

The good news keeps rolling for the American actress who last September was unveiled as the actress set to play Andie in Gone Girl. She will star opposite Ben Affleck in the film directed by David Fincher, who also directed Fight Club, Seven and The Social Network.

The film is an adaptation of Gillian Flynn's bestselling mystery novel of the same name, due to hit our screens later this year. 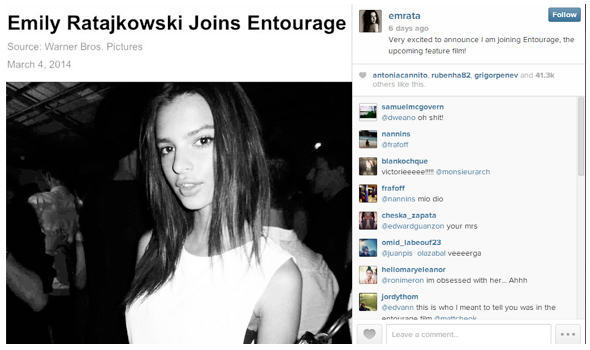 popular
Tributes paid to Limerick based blogger and model Patrick McLoughney
This TikTok hack shows you how to pack more despite baggage allowance
Another Strictly star has pulled out of the live show
This is how much 91-year-old Queen Elizabeth drinks every day
Simon Harris gives three urgent options for easing restrictions next week
Lidl closing early this weekend to thank staff for hard work
Not going anywhere: Baby names set to stay popular for the next decade
You may also like
2 years ago
Turns out, this colour of wine gives you the WORST hangover
5 years ago
Lily Allen has revealed that she was stalked for seven years
5 years ago
Pretty Little Liars actor Brandon Jones could be facing over five years in prison
5 years ago
Gwen Stefani Receives Massive Backlash After "Insulting" April Fools' Prank
5 years ago
Katie Price Names And Shames The Twitter Trolls Bullying Her Son Harvey
5 years ago
Kim Kardashian Blasts "Body-Shaming and Slut-Shaming" In Brilliantly Honest Post
Next Page