Prince William and Kate Middleton have released a new picture ahead of Prince George’s first birthday this Tuesday, showing their baby boy walking about on his own.

The adorable snap shows the young prince dressed in denim overalls and a navy polo shirt with a mischevious look on his face.

Prince George is definitely taking after dad William’s looks and was showing off his chubby cheeks and blonde hair while flailing his arms.

END_OF_DOCUMENT_TOKEN_TO_BE_REPLACED

According to US Magazine, the photograph was taken at a family visit to the ‘Sensational Butterflies’ exhibit at the National History Museum on July 2nd.

Photographer John Stillwell from the Press Association told the magazine:

"He was very lively, very confident and very sure of himself. He's a very determined young boy. And who does he look like? I’d have to say his dad, William."

The visit marked the start of celebrations for the youngest royal’s birthday, and it is believed mum Kate will be throwing a tea party for both families on Tuesday in their Kensington Palace home to mark Prince George turning one. 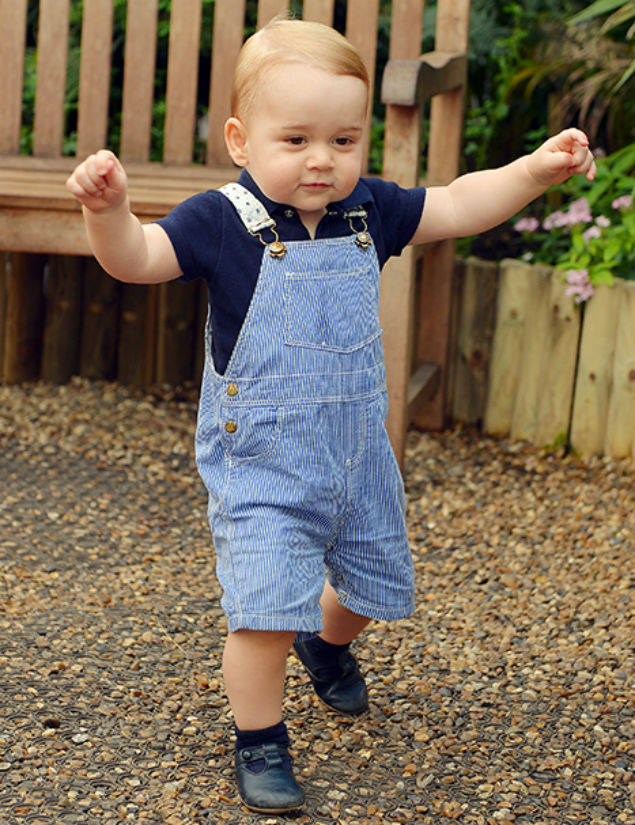 Image via US Magazine

popular
Miracle baby on the way for bride whose partner died on wedding day
Tributes pour in for 28-year-old primary school teacher killed in London
Johnny Depp confirms he will be back as Grindelwald in Fantastic Beasts 3
Why Are Men so Obsessed With Boobs? The Answer is Pretty Surprising...
Here's the average age people lose their virginity around the world
You could be shopping in an Aldi store with no checkouts in Ireland in the near future
So are we dating?... 10 signs it's time to define your relationship
You may also like
2 years ago
Turns out, this colour of wine gives you the WORST hangover
5 years ago
Pretty Little Liars actor Brandon Jones could be facing over five years in prison
5 years ago
Gwen Stefani Receives Massive Backlash After "Insulting" April Fools' Prank
5 years ago
Katie Price Names And Shames The Twitter Trolls Bullying Her Son Harvey
5 years ago
Kim Kardashian Blasts "Body-Shaming and Slut-Shaming" In Brilliantly Honest Post
5 years ago
WATCH: Emma Watson Launched HeForShe Arts Week On International Women’s Day
Next Page