Suzanne shared a snap of her dog Coco earlier this morning.

Irish beauty blogger and entrepreneur Suzanne Jackson has returned to Ireland as one of her dogs is unwell.

Jackson, who recently relocated to Portugal, told her followers that she was back in Dublin in order to take care of Coco this morning. 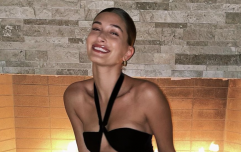 Hailey Bieber hints that she's starting her own skincare range

END_OF_DOCUMENT_TOKEN_TO_BE_REPLACED

Taking to Instagram, she wrote: "Woke in Ireland. Unfortunately Coco hasn't been well, so that delayed us bringing the dogs to Portugal. She's not well again, so I came home for a bit."

Jackson added that she'll chat to her followers later to give more of an update.

Earlier this year, Jackson announced that she had moved to Portugal with her husband Dylan O'Connor. She subsequently added that the relocation would be temporary, and that the couple would divide their time between Ireland and Portugal.

END_OF_DOCUMENT_TOKEN_TO_BE_REPLACED

"We haven’t decided on the exact length of time. But we’re definitely here for the rest of the summer."

She added: "Obviously, I have work commitments, including TV and SOSUbySJ."

When asked about her three dogs - Coco, Harper and Pixie - Jackson said that they had to ensure that their Portugal home was dog-friendly before they could bring them over.

In the summer of 2018, Suzanne and Dylan bought a €1.8 million mansion in Malahide.

popular
At least seven bodies have been found in search for Brian Laundrie
Gogglebox's Paige Deville never wants to speak to mum again after quitting show
Richard Madeley slammed for "victim blaming" after questioning guest who was spiked
Wait... Are Maura Higgins and Giovanni Pernice back together?
The First Quadrillionaire? Paypal Accidentally Gives Man $92 Quadrillion
Groom kicks out wedding guests after they all wear white
Police investigating viral video of child being 'forced' to have ears pierced in UK
You may also like
4 days ago
The blunt bob is back and celebrities are loving it
5 days ago
Boots have revealed their top gift sets for Christmas – and Santa, are you listening?
5 days ago
We asked the experts how to wax at home like an absolute pro
5 days ago
Like botox, but all natural: I tried cosmetic acupuncture and here's what happened
1 week ago
This year's Body Shop advent calendars are more sustainable than ever
1 week ago
80s blush is trending and we can see why
Next Page