Take That have cancelled plans for a world tour to celebrate their 30th anniversary due to an illness in Gary Barlow's family.

The boyband had been planning to tour all over the globe to mark the special anniversary. However, they will now stick to dates in Europe and the UK so that Gary can be close to home.

The singer told The Mirror:

“We had a big ambition next year to do a world tour, but I have actually got an illness in my family and it means I am not going to travel for the next two years extensively.

“So all the plans for South America and Australia that were coming off...

"I thank my two bandmates who have been so very understanding, but I just have to be at home – I cannot leave.

"I didn’t want people getting frustrated that we’re not getting out there. I’m a little stuck at the moment, so please be understanding.” 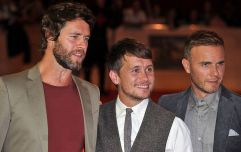 Take That have repaid nearly £20m owed in tax money

END_OF_DOCUMENT_TOKEN_TO_BE_REPLACED

He added that he is currently throwing himself into his work as he is going to be taking a 12-month "sabbatical" soon, to focus on  projects other than music.

At present, their two sold-out Dublin dates on April 29 and 30 are unaffected. The stadium tour is expected to kick off next April

Girls With Goals || Her · Ep.161: Feeling Peachy - Sharon Keegan of Peachylean on being an absolute BOSS!
popular
5 best road trips to do in Ireland this summer
The DIY frozen coffee recipe that's so delicious you'll never pay for an iced latte again
Women's anger after being told to leave Wetherspoons for wearing "inappropriate" tops
FM104 apologise for "making light" of voicemail from 4-year-old boy with additional needs
Fashion brand Shein accused of trademark infringement
No, you really shouldn't be "dry scooping" your pre-workout powder
Chrissy Teigen makes second public apology for "awful" cyberbullying
You may also like
1 year ago
Robbie Williams to rejoin Take That for a special #Covid-19 online charity concert
2 years ago
Take That fan with terminal ovarian cancer seeks wheelchair accessible tickets
2 years ago
Take That just announced that there are MORE tickets on sale for their Dublin gigs
2 years ago
Robbie Williams 'to reunite' with Take That for a special performance
2 years ago
Take That have announced a massive greatest hits tour...and they are coming to Ireland
4 years ago
We have the Take That set-list for tonight's gig in the 3 Arena
Next Page