Vicky wrote that her doctors are currently monitoring the cyst's progress.

Geordie Shore star Vicky Pattison has thanked her followers for their support after she shared that doctors found a cyst on her ovary.

Taking to her Instagram page last night, the influencer gave fans an update on her health. 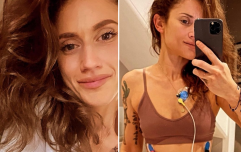 END_OF_DOCUMENT_TOKEN_TO_BE_REPLACED

She said: "As you guys know I have been struggling with my periods for a while and last week I went to the doctors in the hopes of finally getting some answers.

"After a consultation with a GP, some blood tests and an ultrasound, they discovered some abnormalities on my ovaries – in particular a 4 cm sized cyst on the left one, which is most probably why my periods are so painful."

The reality star went on to say that while she's glad she has answers, she wasn't expecting these results.

She continued: "I had prepared myself to maybe hear that I was suffering from PMDD or something & I thought I had braced myself for the worst but this just hadn’t even occurred to me & understandable last week I felt a little overwhelmed – which is why it’s taken me so long to share this.

"As many women may know, a cyst of this size can make conceiving naturally very difficult – which is enough to take the wind out of any woman’s sails let alone a woman in her 30’s."

END_OF_DOCUMENT_TOKEN_TO_BE_REPLACED

Despite this, Vicky told her fans that she wouldn't focus on the worst possible outcome of her diagnosis.

She said: "I am instead going to be realistic and positive.

"I have a call with my doctor this week & I think for now he just wants to keep an eye on it & schedule regular scans to monitor its progress."

Vicky then thanked her followers for their support, and encouraged them to seek out help if they concerned about their health.

She said: "If there's something worrying you or niggling away at you about your health - don't put it to the back of your mind - be proactive, get help and make yourself and your health a priority."

popular
Women are rinsing their hair in apple cider vinegar – and the results are amazing
"Hair contouring" is about to be huge, here's everything you need to know
Here are all the Instagram accounts of the stars of Netflix's Cheer
Woman hospitalised following stag attack in Co. Kerry
Worried about a loved one? Here are 5 signs of suicide to look out for
Here's what happens on every day of your menstrual cycle (roughly)
Someone has ranked the penis size of men from all over the world
You may also like
1 day ago
Here is how your trendy bath bombs are actually really bad news for your vagina
5 days ago
Veganuary - why so many people are doing it and what you need to know to succeed
5 days ago
Lynsey Bennett marks 5 years since cancer diagnosis
1 week ago
Blue Monday: 10 small ways to stay positive through the gloominess of January
2 weeks ago
Opinion: Maybe our bodies don't need to be optimised all the time
3 weeks ago
3 wellness trends that will define 2022 – and we are excited
Next Page