Vogue Williams has opened up about having her face edited onto photos used on pornography sites.

Speaking on Angela Scanlon's Ask Me Anything, the model described how "weird" and worrying it was to discover the images and how she feared her kids would see them.

"About three weeks ago, or something, it came up again and they've updated the picture and I mean, if I thought I was having a good time before, I’m having a really good time in these ones."

END_OF_DOCUMENT_TOKEN_TO_BE_REPLACED

Vogue went on to describe how explicit the images were, adding: "Willies everywhere - in the eye, in the ear, a lot of willies! I'm adventurous, not that adventurous"

She told Angela that despite her efforts, the images are very difficult to get removed from sites.

"It’s kind of weird but do you know what the weirdest thing is? That you can’t get them down. Like, they’re just up, anyone is allowed to put them up, and they are starting to look more realistic. 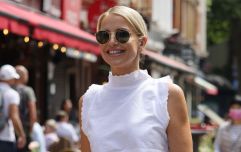 END_OF_DOCUMENT_TOKEN_TO_BE_REPLACED

"The most recent ones look so realistic and I can kind of laugh about it but at the same time I hope they come down at some stage."

She added that one of her biggest concerns was that her kids may see them - something she obviously never wants to happen.

Vogue is expecting her third child with partner Spencer Matthews in April 2022.

The couple currently have two children together - three-year-old Theodore and one-year-old Gigi.

popular
Molly-Mae Hague fans think they officially know her baby's name – and it means cloud
Baby found unattended in pram in Dublin, Gardaí reveal
Joanna Cooper heartbroken after her mum is diagnosed with dementia
"I feel like I lost myself": Nathalie Lennon on her mental health struggles and her latest project with Pieta
Tasha Ghouri hits back at another islander who called her relationship fake
Conor Mcgregor hit by car ‘at full speed’ while cycling
Gwen Stefani reportedly pregnant with baby number four
You may also like
1 month ago
Vogue Williams will be on this week's Late Late Show
1 month ago
"I slept with your fella": Vogue speaks out about ex's cheating
2 months ago
Vogue Williams speaks out about being slut-shamed
3 months ago
Vogue Williams speaks out against Britney's naked photos
3 months ago
My Therapist Ghosted Me adds a third 3Arena date
4 months ago
Vogue Williams explains why she kept photos from wedding to Brian McFadden
Next Page