Will Bayley has quit Strictly Come Dancing after suffering a  knee injury during rehearsals.

The Paralympian issued a statement on Wednesday confirming the news, admitting he was "gutted" his journey on the BBC show had come to an end.

"I’m gutted my Strictly journey has had to come to an end. I’ve loved being part of the show, and am so grateful for the phenomenal support we have received.

"I want to say a special thank you to Janette for believing in me and giving me the confidence to believe in myself. The things we achieved, from our Couple’s Choice dance through to the lifts in our Salsa, will stay with me forever. I’ve had the time of my life."

"To me, it meant more than just a show...I just wanted to try and help people as well!"

“Absolutely devastated that Will and I will not be able to continue dancing. We made some incredible memories that I will never forget, and I am pleased to have shared them with such an inspirational person, whom I can now call a friend for life.”

“We are so sad that Will is unable to continue on the show. He is an incredible and talented person who has brought us some unforgettable moments this series - in particular his powerful and moving Couple's Choice routine. He will be greatly missed and we wish him a speedy recovery.” 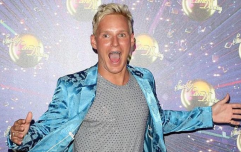 Jamie Laing has been forced to quit Strictly Come Dancing

END_OF_DOCUMENT_TOKEN_TO_BE_REPLACED

Bayley did not perform during Saturday's episode. However, viewers were shown a clip of him jumping off a table in rehearsals and landing awkwardly on his knee.

The Sun report that he will not be replaced in the final, and that there will only be three couples competing for the glitter ball trophy.

He is the second celebrity forced to withdraw this year due to injury, after Made in Chelsea's Jamie Laing had to pull out before the series had even begun.

popular
Around the world: The most popular baby names in major cities across the globe
WATCH: The trailer for To All The Boys I've Loved Before part 3 is here
"The female gaze is brilliant:" Why Phoebe Dynevor is proud of Bridgerton's sex scenes
Matt LeBlanc And Matthew Perry Reveal Reason Why They Didn’t Attend Jennifer Aniston’s Wedding
Here's how to do the genius TikTok wrap hack that everyone's going mad for
Netflix announces new true crime documentary series: The Vanishing At The Cecil Hotel
Here's the average age people lose their virginity around the world
You may also like
10 months ago
Kevin Clifton has quit Strictly Come Dancing after seven years
11 months ago
Strictly's Giovanni Pernice and Ashley Roberts split after one year of dating
1 year ago
Daniel O'Donnell declines Strictly Christmas special incase he 'drops dead'
1 year ago
Apparently, a couple of Strictly stars have been 'secretly' getting together this year
1 year ago
'Voguing IS dancing' Michelle Visage's powerful statement following Strictly exit
1 year ago
Neil Jones confirms he will make a comeback to Strictly tonight
Next Page