Staying in this weekend?

Yeah, we don't blame you. The weather has been really all over the place lately, so the idea of curling up on the couch and bingewatching a new TV show or movie is very tempting.

Thankfully, Netflix have come to the rescue and have added a number of new movie sand TV shows just in time for the weekend.

Chilling Adventures of Sabrina re-imagines the origin and adventures of Sabrina the Teenage Witch as a dark coming-of-age story that traffics in horror, the occult and, of course, witchcraft. Part Three finds Sabrina reeling from the harrowing events of Part Two. Though she defeated her father Lucifer, the Dark Lord remains trapped within the human prison of her beloved boyfriend, Nicholas Scratch.

Sabrina can't live with herself, knowing that Nick made the ultimate sacrifice and is suffering, burning in Hell under Madam Satan’s watchful eye. So with an assist from her mortal friends, “The Fright Club” (consisting of Harvey, Rosalind, and Theo), Sabrina makes it her mission to free him from eternal damnation and bring him back into her arms.

However, the Dark Lord's unseating has sent shockwaves through the realms—and, with no on the throne, Sabrina must assume the title of “Queen” to defend it against a challenger, the handsome Prince of Hell Caliban. Meanwhile, in Greendale, a mysterious carnival rolls into town, bringing with it a threat to the Spellmans and the coven: A tribe of pagans looking to resurrect an ancient evil…

The Goop Lab With Gwyneth Paltrow 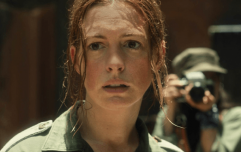 END_OF_DOCUMENT_TOKEN_TO_BE_REPLACED

A curiosity-driven exploration of boundary-pushing wellness topics – brought to you by Gwyneth Paltrow’s lifestyle site, goop.  The goop lab with Gwyneth Paltrow is a six-episode series, guiding the deeply inquisitive viewer in an exploration of boundary-pushing wellness topics, including: psychedelics, cold therapy, female pleasure, anti-aging, energy healing and psychics.

Monster hunters Fred (J.C. Mackenzie) and Deloris Allen (Tamara Taylor) hide their identities as members of a covert syndicate while their teenage kids, Geoff (Gabriel Darku) and Viv (Aurora Burghart), are forced to live in a town trapped in the past. From the comics by Steve Niles and Damien Worm.

This sitcom about a Seattle family who must readjust to simple living in Georgia returns for its second season. The McKellans are sticking it out in the South with even more antics under M'Dear's roof. From a wedding and boyfriend drama to a step showdown and sibling squabbles, the party's just getting started.

Pandemic: How to Prevent an Outbreak

This series follows the annual cycle of the influenza virus, showing how the public is generally unprepared for the chaos that a common flu can create.


popular
The comfy €42 M&S boots we're going to be living in all spring
The floral Penneys dress that will instantly update your spring wardrobe
The €30 New Look skirt that will go with everything in your wardrobe
Better bundle up, Met Éireann are forecasting snow in parts of the country over the weekend
Dancing With the Stars judge Julian Benson will miss tomorrow night's show
The €35 New Look dress that would be the perfect wedding guest outfit (and it comes in three colours)
'He's just pure love and joy': Royal insider gives adorable update on baby Archie
You may also like
1 day ago
Production on season two of Netflix's The Witcher has begun
2 days ago
Jennifer Lawrence is set to star in a new sci-fi comedy for Netflix
2 days ago
The premiere date for Ryan Murphy's new Netflix series Hollywood has been announced
2 days ago
The first look at Chris Hemsworth's Netflix movie Extraction is here
2 days ago
Here is everything that's going to be coming to Netflix in March
3 days ago
The story behind Netflix's latest true crime documentary is absolutely off-the-wall bonkers
Next Page