Tale as old as time.

Dame Angela Lansbury is a legend for lots of reasons: to a generation (or more) of TV viewers, she will always be wily super-sleuth Jessica Fletcher in the long-running Murder She Wrote.

But some younger folks out there might know her best as the voice of Mrs Potts in Disney's 1991 musical classic, Beauty And The Beast. 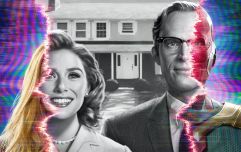 END_OF_DOCUMENT_TOKEN_TO_BE_REPLACED

In the movie, Lansbury sings the famous title track that accompanies the scene of Belle and the Beast falling in love.

This year marks 25 years since the release of the animated movie - and there's evidently a lot of love still out there for it, stoked in no small part by Disney's live action remake, starring Emma Watson and Dan Stevens, which is currently being filmed.

At the weekend, there was a special anniversary screening of the movie at Lincoln Centre in New York. And as a surprise treat at the end, Lansbury came out on stage to sing a live version of the title track - accompanied on the piano by the song's co-writer Alan Menken.

And as you'll see from the clip below, she's still got it.

Elsewhere, Menken and other creatives involved with Beast have been reminiscing about the making of the Oscar winning film.

"Beauty And The Beast is about love,” Menken said. “It really is so fully about love and acceptance.”

Girls With Goals || Her · Ep.153: Scholarship Squad - We chat to Facebook's Claire O'Hara about our Smurfit Scholarship fund.
popular
Where are they now? The men of Sex & The City
Joe Sugg and Dianne Buswell have finally opened up about THOSE engagement rumours
Dad designs bikini line for transgender teens
Someone has ranked the penis size of men from all over the world
Award winning Irish film about conversion therapy debuting this weekend
The latest TikTok beauty trend is drawing on under-eye bags to look tired
22 discontinued chocolate bars that we REALLY want to bring back
You may also like
1 month ago
Chris Evans to voice Buzz Lightyear in new Toy Story spin-off film
1 month ago
Disney officially announce Sister Act 3 AND Hocus Pocus 2 are coming
1 month ago
QUIZ: Can you guess the Disney movie from its opening line?
2 months ago
Seth Rogen is rebooting Darkwing Duck for Disney+
2 months ago
QUIZ: How well do you know the lyrics to these Disney songs?
2 months ago
Le Creuset have released a Star Wars collection and it's out of this world
Next Page