Ant McPartlin features on Britain's Got Talent... and everyone gets totes emosh

When Britain's Got Talent aired on Saturday - fans were given a glimpse of Dec Donnelly lining out alongside Ant McPartlin.

The hit reality TV talent show is pre-recorded during the early audition rounds and were filmed before Ant's arrest for drink-driving.

In the most recent airing, the guys were seen joking around and interacting with the auditionees and audience, as well as getting to grips with a new feature to the show - a special Ant and Dec golden buzzer.

And it seems that simply the sight of the television duo back together on the small screen had a whole load of folk getting totes emosh.

Indeed, the likes of Twitter was flooded with gushing comments relating to just how much Ant was missed.

The thing I've noticed tonight watching bgt is ant mcpartlin, you can't tell this man is struggling, you can't see he's troubled by his addictions. This is why we need to make it easier to speak up about our problems. 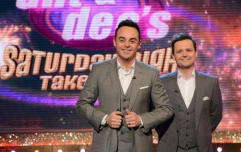 END_OF_DOCUMENT_TOKEN_TO_BE_REPLACED

One individual futhermore pointed out that it just didn't look like Ant was under so much strain, stating: "You can't tell this man is struggling, you can't see he's troubled by his addictions. This is why we need to make it easier to speak up about our problems."

ICYMI: Hope you've got a comical amount of hankies up that sleeve @IamSPELMANN, because we're all gonna need one... 😢😢😢 #BGT pic.twitter.com/AESrbm1wGa 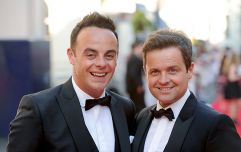 'I wasn’t sure what was going to happen...' here's the emotional speech Dec gave off-air

END_OF_DOCUMENT_TOKEN_TO_BE_REPLACED

For the final two episode of Saturday Night Takeaway, Dec had presented on his own - although for the finale itself, he was aided on screen in Orlando, Florida by Scarlett Moffatt and Stephen Mulhern.

Three weeks ago, Ant McPartlin was arrested on suspicion of drink-driving. The 42-year-old star was involved in a three-car smash: his Mini hit two other vehicles in south-west London.

He has now been charged and will appear in court next week.