Movie goers cannot wait for Incredibles 2 to hit the cinema screens this summer, a whole 14 years since the original animated feature in the popular action adventure. The Pixar made film will be released by Walt Disney Pictures in mid-June, and the teaser poster is already out... 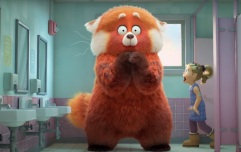 END_OF_DOCUMENT_TOKEN_TO_BE_REPLACED

But it's not just excited kids who are looking forward to the family movie, nor people merely interested in the ups and downs of the superhero plot. No, it seems that one of the main characters has their own growing fan base of lustful admirers... because they think they are 'hot'.

And it's not Mr Incredible either. He may be the nominal lead of the franchise, but his flexible wife is getting all the attention. It turns out throngs of admirers are besotted with Elastigirl aka Helen Parr, who is voiced by Holly Hunter.

A main part of the attraction is apparently because Parr is 'dumb thicc'. Now we've looked this up on Urban Dictionary, and apparently when a woman is 'dumb thicc', that means they are amply endowed in terms of the hips and thighs.

In fairness it seems to be mainly women who are admiring Elastigirl's dumb thiccness, but she's certainly not short of male admirers too.

Okay but do y’all see how thicc Elastigirl is https://t.co/RINCcVLTGS

why is elastigirl so thicc lol

This just in: I still massively fancy Elastigirl. #goodnight

Elastigirl is a thicc Queen! pic.twitter.com/x4otI9EcuN

popular
Vogue Williams slams man who refused to swap seats with her on plane
This is why the world is obsessing over Adidas Gazelles
Are we getting a mini heatwave in September?
Ryanair, easyJet and BA issue warning to anyone boarding with smart bag
Phoebe Bridgers and Paul Mescal go sale agreed on West Cork home
Greg O'Shea actually left Love Island to go to his granny's funeral
Gemma Owen spills the tea on how Luca gets on with Michael
You may also like
1 year ago
Chris Evans to voice Buzz Lightyear in new Toy Story spin-off film
3 years ago
Disney announces new Pixar movie 'Soul' set for release in summer 2020
3 years ago
Here is the first look at Disney's Monsters Inc TV show
3 years ago
Pixar's eight minute film about sexism in the workplace cleverly highlights a serious reality
4 years ago
There'll be more dog-friendly cinema screenings in Ireland this month and yeah, we're going
4 years ago
This Dublin cinema is hosting a Pixar month and we are absolutely buzzing
Next Page