After a month that feels like it has been going on for forever, we have made it to the end of January.

And with the weather set to be a little all over the place today, the idea of staying in tonight is very tempting.

If you're feeling the same kind of way, we have some good news: the lineup for this week's Late Late Show is here.

Arlene Foster, Marian Keyes and Johnny Logan are among the guests on the RTÉ show tonight.

At 11pm this evening, the bell will toll on the UK's membership of the EU, and Northern Ireland's First Minister Arlene Foster will be live in studio with Ryan.

Elsewhere in the episode, best-selling novelist Marian Keyes will be in to discuss her latest work, as well as give her hilarious takes on modern life and the pressures of everyday living. 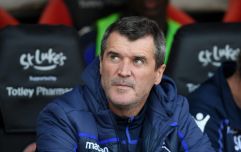 END_OF_DOCUMENT_TOKEN_TO_BE_REPLACED

Tomi Reichental and Suzi Diamond, two holocaust survivors who went on to create lives for themselves in Dublin, will join Ryan to discuss their harrowing childhood concentration camp experiences, 75 years after Soviet troops liberated Auschwitz.

And as 2020 marks 40 years since Johnny Logan's Eurovision glory with What's Another Year, the King of Eurovision will be in studio to celebrate the milestone with a special performance of the song.

Shay Healy, who penned the 1980 winning entry, will also be here and we will have music from Somebody's Child.


popular
The comfy €42 M&S boots we're going to be living in all spring
Why you shouldn't put your address on your luggage when going on holiday
The €35 New Look dress that would be the perfect wedding guest outfit (and it comes in three colours)
Jameela Jamil addresses 'cruel' and 'scary' online abuse she received last week
Sick of being sick? 5 easy ways to super-charge your immune system
The floral Penneys dress that will instantly update your spring wardrobe
The €30 New Look skirt that will go with everything in your wardrobe
You may also like
1 week ago
Here's who will be on The Late Late Show's Valentine's Day special
2 weeks ago
Andrew Maxwell, Brian Dowling and Ireland's Olympic hopefuls lead the lineup for the Late Late Show
4 weeks ago
Viewers raise over €290,000 after Munster's Billy Holland and wife Lanlih's emotional Late Late Show appearance
4 weeks ago
Derry Girls' Siobhan McSweeney was an absolute treasure on the Late Late Show last night
4 weeks ago
The Late Late Show to pay tribute to incredible patients, families and staff at CHI at Crumlin this week
1 month ago
Nóra Quoirin's parents will be on The Late Late Show this week
Next Page