Johannes Radebe and Graziano Di Prima made history back in November when they performed together on the show, the first time a same-sex couple has done so.

The BBC received almost 300 complaints regarding the performance, with many claiming that it was "offensive to show two men dancing together."

None of the complaints have been upheld, according to a new BBC report.

After the performance, dancer Johannes said that he felt "liberated."

@emelisande sang one of her new songs SHINE ✨ and @jasongilkison put us in formation 🙌🏾 @lubamushtuk @aljazskorjanec always on top form and my dear friend @grazianodiprima beaming with pride ❤️ This meant the world to so many people I know and love, @bbcstrictly thank you on behalf of us all...🌈 #beproud

"For the first time in my life, I feel accepted for who I am," he told HELLO! magazine at the time. 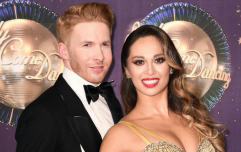 END_OF_DOCUMENT_TOKEN_TO_BE_REPLACED

"That says so much about the people of this country. To be able to dance with a friend I respect and adore is joyous. There’s bromance galore between us, but there were no male and female roles, just free movement.

"It was beautiful, classy and elegant."

The BBC received 189 complaints from viewers after the initial performance, and another 103 in the coming weeks.

popular
Paul Mescal wore O'Neill's shorts while carrying cans of pink gin so I bought O'Neill's shorts and cans of pink gin
Women and girls struggling with access to period products during #Covid-19, research shows
This amazing hanging egg chair is coming into Aldi next week and go, go go (but safely)!
5 reasons why we need more videos of Doireann Garrihy's new puppy immediately
After days of silence, Scott and Sofia finally comment on the break up rumours
Her Quarantine Quiz Week 9: Iconic Irish music videos
Cristiano Ronaldo has been called 'racist' for his latest Instagram post
You may also like
1 year ago
'He’s an absolute rat': Stacey Dooley's ex just blamed her Strictly partner Kevin for their spilt
1 year ago
Chris Evans has already said yes to the next series of Strictly Come Dancing
1 year ago
Joe Sugg CONFIRMS his relationship with Strictly partner Dianne Buswell in a cute snap
1 year ago
Strictly's Neil Jones just revealed why he has never been given a celebrity dance partner
1 year ago
Everyone compared Tess and Claudia's outfits to this during last night's Strictly
1 year ago
AJ Pritchard hints at potential romance with Strictly partner Lauren Steadman
Next Page