The coming of age drama is set in Belfast during the Troubles.

Accepting the BAFTA, Branagh spoke about how the film wasn't an "easy pitch" given the subject matter, but it all came together thanks to the talents of cast and crew. END_OF_DOCUMENT_TOKEN_TO_BE_REPLACED

The director said: "Thank you to British cinema audiences for watching in tonnage a UK and Irish cinema film at UK and Ireland cinemas.

"All hail the streaming revolution, but all hail the big screen too. It's alive, and long may they live together."

He continued: "This is a black and white film about the Troubles. It was not an easy pitch, but when the great talent in this room dreams up anything similarly unlikely to make or to finance, please remember if you build it, they will come.

Congrats to all of our winners tonight! ✨ Take a look at the full list here: https://t.co/aMXnte6tLd #EEBAFTAs pic.twitter.com/WT1XYLKV7R END_OF_DOCUMENT_TOKEN_TO_BE_REPLACED

"We are so proud to be included in this year's films; they are all outstanding. Thank you very much for being so kind to ours, we deeply appreciate it."

A number of Irish stars -  Caitríona Balfe, Jessie Buckley, Ruth Negga and Ciarán Hinds - were nominated for BAFTAs in the acting categories, but they missed out. 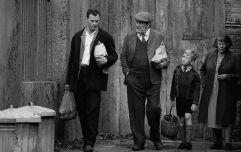 END_OF_DOCUMENT_TOKEN_TO_BE_REPLACED

Balfe, Buckley and Negga appeared alongside each other in the Best Supporting Actress Category for their roles in Belfast, The Lost Daughter and Passing, respectively. However, the BAFTA went to Ariana DeBose for her performance in West Side Story.

Hinds was nominated for Best Actor for his role in Belfast. However, that award went to CODA's Troy Kotsur.