Why To The Bone is disappointing... in both its message and its delivery

If you want to learn about anorexia, avoid this film.

If you want to watch age-old stereotypes perpetuated for an hour and a half, then this is the picture for you.

When I first heard that Netflix was producing a film on eating disorders, I was filled with hope. I struggled since the age of 13 with anorexia and bulimia, receiving inpatient treatment for both. So the idea that an illness which continues to garner such limited media attention would now be portrayed on a platform as far-reaching as Netflix resulted in genuine excitement on my part.

What a terrific opportunity to shatter the misconceptions that most people still believe about the issue, I thought. But 107 minutes later and I was racked with disappointment that the filmmakers had failed to seize the chance to enlighten, to teach and to cast a realistic spotlight for those unaware of what goes on in the mind of a sufferer. Lily Collins plays the role of Ellen, a 20-year-old artist struggling with a string of personal problems which combine and result in a miserable existence of calorie counting, exercising to the point of pain, and an emaciated frame. Agreeing to finally receive in-house treatment for her anorexia, she encounters several fellow sufferers and the film tells their story.

And I feel I should also touch on the concern I felt for Collins; a former eating disorder sufferer who seemingly shed quite a bit of weight for the role.

An actor who was a former drug addict would never have to peek over the precipice of a relapse to fit a certain role and there must have been a legitimate danger that Collins would slip back into the illness she once overcame with the body transformation she underwent for To The Bone.

Considering Collins’ full experience with the plight that is an eating disorder, it surprises me that she did not have any problems with the script that, in my opinion, glamourised the notion of a sufferer of the illness.

The concept of a wounded soul, a misunderstood female artist so insular that she locks herself away and that’s how she falls into anorexia, is just so cliche.

The portrayal of male and female sufferers in the film is one of the most offensive elements, with one young man in the house receiving treatment opposite at least six females. And of course, the male in question keeps his chin up and tries to maintain high-spirits among his fellow patients, none of whom appear as strong or able to cope as Luke, played by Alex Sharp.

#ToTheBone worst film I've ever watched. As an eating disorder sufferer, nothing but horrifically innacurate stereotypes and dialogue used.

The running “when’s dad coming home?” theme, coupled with the fact that Ellen’s mother is now in a lesbian relationship, really hammers home an untrue point that this is a film about females. Females… and Luke.

Eating disorders are not gender-exclusive and it would certainly have come as a beneficial eye-opener to viewers to have had more than one man (who just so happens to be a keen ballet dancer) as the sole male sufferer in the film.

It’s not just insulting to real-life male sufferers to downplay the fact that it is so pervasive across both genders but it’s also disingenuous to suggest that female sufferers require constant pick-me-ups courtesy of the only male in the house and that it’s only through the tactful and rational Dr Beckham, played by Keanu Reeves, that a light at the end of the tunnel can be seen. 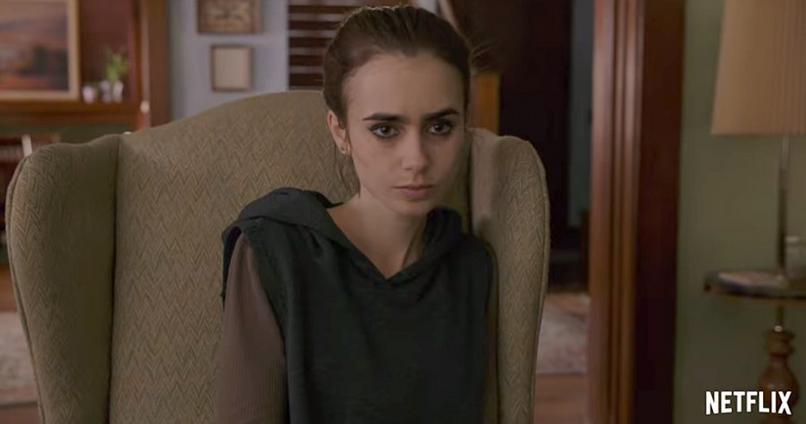 The heavy-handed way with which the subject of eating disorders is dealt with is also genuinely cringeworthy at times throughout this movie.

The writers clearly wanted to depict the various methods that different sufferers rely on to keep their weight down and what more ridiculous way to do that than having two of the female inpatients discussing their preferred techniques at the sink, in full earshot of the nurses? I can assure you that that does not happen, nor would It be allowed at any inpatient facility.

It seems like the filmmakers didn’t know whether they wanted to approach the film as a sensitive cautionary tale, which it does accomplish at stages such as the scene when a pregnant patient loses her baby; or a black comedy, which is attempted during certain exchanges between Luke and Ellen. At one point, Luke describes sex with a girl as being “like two bags of bones banging off each other.” The lack of direction is more than a little telling and nothing is accomplished. No enlightenment. No teaching. No spotlight whatsoever.

The questionable portrayal of all sufferers as outcasts and unhinged is also false and disappointingly reductive when it comes to the opportunity that the filmmakers had to debunk those stereotypes, rather than embrace them.

In one last dramatic hoorah from the writers to salvage what stands alone as a poor piece of filmmaking, regardless of its crude representation of eating disorders, Ellen finally acquiesces to eat but only in the arms of her mother and only from a baby’s bottle. It’s easy to see with what the makers were trying to accomplish but they hadn’t done the requisite groundwork to allow themselves such an artistic ending.

On a filmmaking level, no resolution is offered as the lines between reality and dream are blurred before it’s suggested that Ellen’s condition hasn’t really improved.

popular
Toddler dies after being struck by vehicle in Co. Cork
Women are rinsing their hair in apple cider vinegar – and the results are amazing
New photo of Bernadette Connolly released as investigation continues
Clubbers left "bleeding from their mouths" after accidentally drinking shots with caustic soda
Orange is the New Black and Seinfeld star Kathryn Kates dies aged 73
Gardaí find "no evidence" of needle spiking in Irish nightclubs
Worried about a loved one? Here are 5 signs of suicide to look out for
You may also like
5 months ago
Nicolas Hoult cast in lead role of Dracula spinoff movie Renfield
6 months ago
QUIZ: How well do you remember Uptown Girls?
6 months ago
Don't panic but Chris Pine has been spotted in Ireland
7 months ago
Enchanted sequel: New pictures from the Enniskerry set as filming gets underway
8 months ago
Dear Evan Hansen: The award-winning musical is heading for screens and the trailer is here
1 week ago
WATCH: The trailer for Love Is Blind season 2 is officially here
Next Page