Christmas FM is back as Kissmas FM for one week only

It's baaaack. Well, kind of.

There's no denying love is in the air this week - but now it's going to be on the air, too.

Yes, Christmas FM is making a return to the airwaves this week - but this time, as Kissmas FM.

The team behind the festive station - as well as the spook-tacular Halloween FM - confirmed the launch of the new pop-up station - which will "be bringing you the Magic of Love this Valentine's."

Oh, and it is officially back on the airwaves as of today.

That's right, Ireland’s Valentine’s station will be taking over all Christmas FM digital channels from February 11 until February 14. 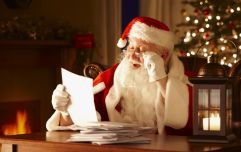 END_OF_DOCUMENT_TOKEN_TO_BE_REPLACED

Kissmas FM will be playing non-stop love songs, letting listeners take time out to focus on the world’s greatest feeling and send out their messages of love.

The station launched at 7am today [February 11] and will be taking over all the Christmas FM digital channels.

That means you can listen to it at ChristmasFM.com, via the Christmas FM app, on TuneIn or by telling your smart speaker to ‘play Christmas FM Ireland’.