So, obviously we're all obsessed with Maura Higgins.

She's a gas bitch, and has been totally carrying this season of Love Island (well, Ovie has helped.)

However, some viewers were left less than impress by her behaviour this week, it seems.

Ofcom has received 32 formal complaints about Maura Higgins, and her behaviour.

As you may recall, Maura straddled her fella, Curtis, looking for sex. Fair enough hun, get yours.

Curtis, clearly not up for it, said he was tired and that "tonight is not the night."

However, Maura, who has not exactly been shy about her sexual needs, wasn't super happy.

Maura responded: "Well if tonight is not the night, then what night is the night? I want you."

When she woke up the next day, and she was still mad with Curtis, telling Molly-Mae Hague that she was getting sexually frustrated. 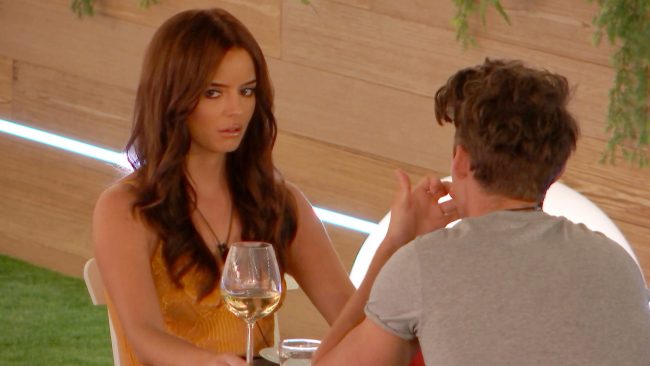 And while it was all a bit of fun, a number of people have complained about Maura's carry on.

A spokesperson for Ofcom told The Sun:"We will assess these complaints against our broadcasting rules.""But we are yet to decide whether or not to investigate."

One tweeter said: "Imagine the reaction if Curtis was having a tantrum because Maura wouldn’t have sex with him?"

Another wrote: "If Curtis was getting in a mood with Maura the way she was this would be a whole different story."


popular
Apparently, this is the unique name Conor McGregor and Dee Devlin gave their second child
Say hello to the €40 M&S dress that will instantly brighten your spring wardrobe
Tony McGregor speaks out about finally marrying Conor and Dee
The €30 New Look skirt we're going to be living in for the next few weeks
We are absolutely obsessed with this grey teddy coat, and it's just €29 in the Zara sale
Meghan and Prince Harry issue statement after agreement to leave the royal family is confirmed
Groom calls his fiancée a 'toddler throwing a tantrum over a sparkly toy' for not wanting to buy a €90 wedding dress
You may also like
18 hours ago
It looks like winter Love Island may soon be getting their first Irish contestant
1 day ago
Love Island's Amy Hart says she will freeze her eggs over early menopause fears
1 day ago
The Love Island Villa is under quarantine due to an outbreak of a vomiting bug
2 days ago
Love Island: Nas's reaction to Siannise going on a date was nothing short of incredible
2 days ago
Ex-Islander Sherif Lanre apparently thinks Ollie's exit has been 'made up'
2 days ago
Love Island's Sophie goes on a date with newbie Connagh tonight so let the drama commence
Next Page