Coronation Street has revealed when Gary Windass' crimes will be exposed.

Christmas is meant to be a time of celebration, family and good will - unless you're a character in soapland. Then the holiday season is actually full of breakups, drama and death.

And the holiday season is set to see devastation in Weatherfield this year, as Derek Milligan and Gary Windass' feud escalates.

When Fiz accidentally leaves an antique rifle in Gary's furniture shop, Derek  - who believes that Gary has ruined his life -heads to the Rovers with a mission: to hunt him down. 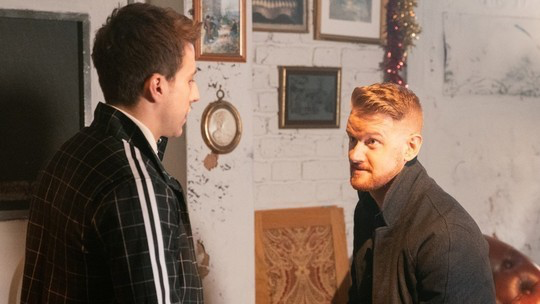 After a showdown at the pub, Derek chases Gary onto the cobbles and the pair end up coming to blows on the Helter Skelter - and as the fists and bullets start flying, there are fatal consequences for one of the residents.

And while the aftermath of the Christmas Day siege hasn't been revealed just yet, Metro report Gary will soon find himself in trouble as the police investigation begins.

END_OF_DOCUMENT_TOKEN_TO_BE_REPLACED

The cops discover that Gary has been working as a loan shark, a revelation that leaves Izzy stunned. And it won't take too long for Gary's news to start to spread...

And while the truth about his life as a loan shark starts to come out, how long will it be until his involvement in the factory collapse comes to light?

The scenes are set to air on December 30.

popular
Two schools in Scotland have been forced to close due to COVID-19 outbreaks
How to cope in this humidity: From sleeping better to dealing with frizzy hair!
This no bake 'Chocolate Refrigerator Cake' recipe has us drooling
Irish influencer Lisa Jordan reveals her little boy's name and it's so cute
It turns out we're all peeling oranges wrong and this madness has to stop
According to experts lunchboxes could be a big transmitter of Covid-19
Here's what happens on every day of your menstrual cycle (roughly)
You may also like
4 months ago
Real life Corrie couple Sally Carman and Joe Duttine have gotten engaged
5 months ago
Corrie's James Burrows has landed his first role after leaving the soap
5 months ago
Coronation Street star 'in self-isolation' over coronavirus worries
5 months ago
'The hardest goodbye': Corrie's Lucy Fallon pays tribute to Bethany Platt as her final scenes air
5 months ago
Coronation Street's James Burrows shares details about Ali Neeson's exit storyline
5 months ago
Corrie's Ian Bartholomew says it is 'uncomfortable' playing Geoff Metcalfe
Next Page