And fans were not impressed with the character's "diabolical" exit, with many feelings the actress deserved better.

Faye announced earlier this year that she would be leaving Corrie, after four years on the soap - although the door has been left open for her to return, if she wants to. 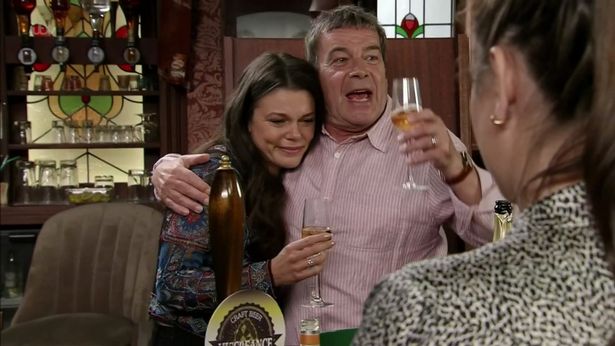 Kate bid farewell to her family and friends at the Rover's Return last night, before flying off to Singapore to travel the world.

In teary-eyed scenes, Johnny raised a toast to his "beautiful daughter" - in what would turn out to be Faye's last on-screen appearance, as Kate wasn't shown actually leaving Weatherfield.

And they definitely weren't impressed that she didn't even get the final scene in the hour-long episode.

Diabolical. Kate should've been seen in a taxi - at the very least - going away. This was @Faye_Brookes' exit. Especially after her huge groundbreaking storyline with @BhavnaLimbachia. Ali is still going to be there on Monday. Kate isn't. Departees should ALWAYS be last. #Corrie

@Faye_Brookes Didn't even get to see Kate drive off in one of Streetcar's cabs, NOT even a 'Farewell Speech' final Rana mention really babes? After everything she's been through in the past year really NOT much of a exit for her was it? #Corrie #GoodbyeKate ?

Bhav's please tell me you are as livid & disgusted with Corrie at "kates" last scenes as me?? I mean wtf was THAT? Faye deserved better than THAT, not even a wave bye as she leaves in her taxi to the airport to start her journey... NOTHING !! #Kana deserved better?so upset???

Being serious right now but Rana's exit was more respectful than Kate's and they killed Rana on her wedding day and gave her no acceptance from her Mum. That's how shockingly bad Kate's exit was. #corrie #kana

So that’s the exit they give Kate after 4 years? Faye deserves so much better #Corrie

That seriously can’t have been Kate’s late scene??? #corrie

i expected more from kate’s last scenes, that felt like she was just going on a two week holiday, not leaving indefinitely #corrie

popular
Paul Mescal wore O'Neill's shorts while carrying cans of pink gin so I bought O'Neill's shorts and cans of pink gin
This amazing hanging egg chair is coming into Aldi next week and go, go go (but safely)!
5 reasons why we need more videos of Doireann Garrihy's new puppy immediately
After days of silence, Scott and Sofia finally comment on the break up rumours
Her Quarantine Quiz Week 9: Iconic Irish music videos
Here's how to keep your dog safe and sound during the hot weather
PSA: White Claw Hard Seltzer is launching in Ireland next month
You may also like
4 days ago
'That’s the most honest answer': Skeet Ulrich reveals why he is leaving Riverdale
3 weeks ago
QUIZ: How well do you remember the first season of It's Always Sunny in Philadelphia
3 weeks ago
QUIZ: Can you name these Rick and Morty side characters from their picture?
3 weeks ago
QUIZ: How well do you remember The Inbetweeners?
3 weeks ago
Paul Mescal 'incredibly proud' of sex scenes in Normal People despite criticism
1 month ago
QUIZ: Can you guess the TV series from the intro lyrics?
Next Page