Coronation Street fans were praising Peter Ash's performance tonight as Paul Foreman opened about being groomed and abused by Kel Hinchley as a child.

Friday night's double-bill saw Gemma and Bernie break into Kel's place to look for Daniel's stolen laptop. However, they found a number of old photographs of Paul, as well as other youngsters.

The two women's confusion soon turned to horror and devastation as they realised what they had found. Bernie and Gemma decided they were going to talk to Paul about the images. 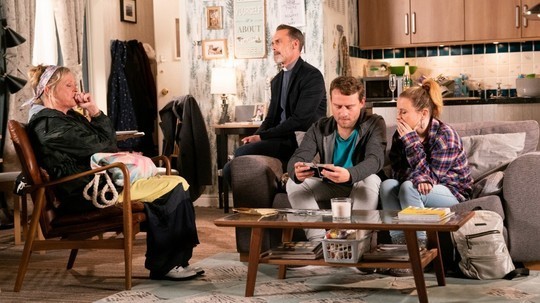 An emotional Paul revealed the extent of the abusive nature of his relationship with Kel, as he recalled his childhood experiences.

And while Gemma and Bernie urged him to report everything to the police, he insisted that revisiting the past in that way would be too painful for him.

Following the episode, fans took to Twitter to praise actor Peter Ash for his powerful performance.

That monologue from Paul there was some outstanding, gut-wrenching, heartbreaking acting.#Corrie

We might be in France but not missing Paul's heartbreaking story .. @itvcorrie delivering some tragic storylines lately. Brilliant portrayal by @PeterAsh_85 #Paul ??

@PeterAsh_85 has been on fire in #Corrie tonight. Fantastic performance and it really moved me. Bravo to the writers for delivering this with such gritty realism and respect. pic.twitter.com/87k7O1jhsZ

Wow @PeterAsh_85 what an amazing performance tonight on corrie.....heartbreaking xx

Heartbreakingly brilliant performance by @PeterAsh_85 on #Corrie tonight, such an important storyline ❤️

popular
QUIZ: How well do you remember The Rugrats Movie?
QUIZ: Can you name the Keanu Reeves movie from just the screenshot?
Womb stories: Bodyform's latest ad is a triumph for women's health portrayal
Staycation: 7 gorgeous glamping spots for your Irish summer getaway
Love Island's Lucie and Luke have confirmed they are, indeed, dating
Lidl launches own fake tan and it'll only set you back €3.99
There's a Harry Potter themed Airbnb in Roscommon and we just need to visit
You may also like
1 day ago
Gardaí seeking public’s assistance in tracing 23-month-old Jasmine Arshad
1 day ago
Broadway actor Nick Cordero dies following Covid-19 complications, aged 41
5 days ago
Ghislaine Maxwell, former girlfriend of Jeffrey Epstein, arrested by the FBI
5 days ago
"I never thought it would be cancer": Stage 4 melanoma patient recalls receiving her diagnosis
6 days ago
Harvey Weinstein victims to receive $19 million settlement
1 week ago
The killing of Elijah McClain: here's what you should know
Next Page