Dancing on Ice is set to have its first same sex pairing.

Steps' Ian 'H' Watkins and professional skater Matt Evers will reportedly be performing together when the series returns next year.

Digital Spy report the idea came about when the singer spoke to producers about the possibility soon after signing up for the show.

An insider told them:

"After conversations with the Dancing on Ice production team, H enquired as to the possibility of being paired with a male professional skater.

"Dancing on Ice were fully supportive of a same-sex partnership and as such this year H will be paired with Matt Evers." 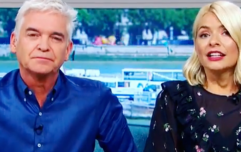 END_OF_DOCUMENT_TOKEN_TO_BE_REPLACED

However, a spokesperson for the show said that they would not be "commenting on speculation around the Dancing on Ice pairings until closer to the new series in 2020."

Dancing on Ice will also have a new judging lineup when the show returns in January, after Jason Gardiner quit. He will be replaced by I'm A Celeb's John Barrowman.


popular
'That’s the most honest answer': Skeet Ulrich reveals why he is leaving Riverdale
Debby Ryan got married and her dress was absolutely stunning
So, William and Harry have a step sister... and who knew?
Selena Gomez Speaks Out About Those Cara Delevingne Dating Rumours
Gwen Stefani reportedly pregnant with baby number four
Someone has ranked the penis size of men from all over the world
Amy Schumer reveals that her husband Chris Fischer has autism spectrum disorder
You may also like
2 months ago
Dancing on Ice's Hamish Gaman announces engagement to Amelia Humfress
3 months ago
Caprice Bourret quits Dancing on Ice and releases a statement to explain her decision
4 months ago
Holly Willoughby looked like a full on Disney PRINCESS last night, and wow
5 months ago
Michael Barrymore 'gutted' as he pulls out of Dancing on Ice after breaking his hand
8 months ago
It's official! Maura Higgins has confirmed that she's joining the cast of Dancing On Ice
8 months ago
Fans are convinced this picture proves Love Island's Maura is on Dancing on Ice
Next Page