David Beckham and actor Kevin Hart's new collaborative advert for H&M is sure to make you smile this morning.

The Road Trip reunites the unlikely double act as they make their way to Vegas in a tour bus, hoping to make "Beckham, the Musical" a big hit in Sin City.

A teaser trailer released last week showed Hart and Golden Balls decked out in identical clothing, and a run-in with the police suggested that it could be a bumpier ride than they'd hoped.

The full, five-minute version of the "Modern Essentials" campaign video sequel has now landed, and we're happy to  report that they still make a funny pair. 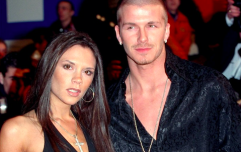 END_OF_DOCUMENT_TOKEN_TO_BE_REPLACED

Highlights? Well there's a cop pulling the bus over, only to agree to overlook a felony providing he can have a picture with David Beckham. It would't have been awkward had he not mistakenly taken Hart to be the Manchester United and England legend. The actual Becks is ordered to take the photo.

There's also a scene where Beckham casually disposes of a snake, quite possibly saving both of their lives, and (spoilers) at one point they accidentally let the bus roll off a cliff and have to watch their (or at least Kevin Hart's) hopes and dreams burst into flames.

Could this series of adverts turn into a trilogy? If H&M can flog enough casual attire from them then we wouldn't be at all surprised.

popular
Women are rinsing their hair in apple cider vinegar – and the results are amazing
Britain’s biggest family to break new record with another baby on the way
Gardaí investigating alleged sexual assaults on teenage girls in Sligo
Scottish dance sensation Lily Douglas has sadly passed away, aged 14
"Hair contouring" is about to be huge, here's everything you need to know
Jenny McCarthy shares update ahead of brain tumour surgery
Worried about a loved one? Here are 5 signs of suicide to look out for
You may also like
11 months ago
Rebecca Loos is now working as a frontline worker in Norway
1 year ago
David Beckham shared his dinner on social media and we really wish he hadn't
2 years ago
Courteney Cox and David Beckham are sharing a hot tub, and other things you definitely needed to see today
2 years ago
Brooklyn Beckham reportedly dating actress Phoebe Torrance after split from Hana Cross
2 years ago
Victoria Beckham shares how she makes her marriage work with David
2 years ago
'Please stop growing up': David Beckham shares sweet message as Harper turns 8
Next Page