Dr Luke has been dropped as head of Sony's Kemosabe Records

Dr Luke is in the midst of splitting with Sony Music, it has been reported.

Sony is said to be "distancing itself" from the musician and producer, whose real name is Lukas Gottwald.

A source told the Hollywood Reporter that both sides are currently negotiating a split, and court papers have revealed that he is no longer CEO of Kemosabe Records, a label owned by Sony. 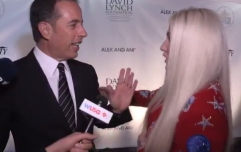 The awkward moment Jerry Seinfeld rejects a hug from Kesha

END_OF_DOCUMENT_TOKEN_TO_BE_REPLACED

The page on Sony's website about Dr Luke has also been removed.

Dr Luke was behind some of the biggest hits of the past decade, including Katy Perry's I Kissed A Girl and Kelly Clarkson's Since U Been Gone, but became embroiled in controversy when he was accused of sexual assault by Kesha.

Kesha sued Dr Luke in 2014, alleging that he sexually assaulted her and intentionally caused her emotional distress, among other accusations, but her claims were dismissed by a judge last year.

Just last month, Kesha's case was dealt another blow when a judge denied the singer's bid to amend her claims against Dr Luke.

Her amended claims allege that Dr. Luke’s companies broke contracts with her by failing to report and pay royalties.

Girls With Goals || Her · Ep.156: 'Beauty Returns' - Rebecca O'Keeffe is BACK and we're talking about viral beauty trends
popular
Pregnant women advised after four preliminary stillbirths linked to Covid in Ireland
Palace source says THIS incident on the tour of Australia upset Meghan's staff
RTÉ wins rights to Harry and Meghan's Oprah interview
Rare "Sahara dust" weather event expected to hit Ireland this week
"Shut the f*ck up:" Alec Baldwin addresses birth of newborn daughter
Kate Middleton has addressed the rumours that she's pregnant with her fourth child
Here's what happens on every day of your menstrual cycle (roughly)
You may also like
6 months ago
Kesha is now a beauty Youtuber and we adore some of her favourite products
4 years ago
Kesha had the perfect response for a particularly horrible Instagram troll
4 years ago
Doctor Luke has banned Kesha from performing at the Billboard Awards
4 years ago
Kesha sang Lady Gaga's 'Till It Happens To You' at a gala and now we're crying
4 years ago
Listen - Kesha has collaborated with Zedd on a new single
4 years ago
Kesha surprised fans with this performance at Coachella
Next Page