Dustin the Turkey has responded to the, ahem, backlash caused by his recent Comic Relief sketch featuring Niall Horan.

The anthropomorphic turkey caused a bit of ruckus over the weekend following a comedy bit on RTÉ Does Comic Relief in which he interrupted Mullingar's own Niall Horan to complain that he wasn't, in fact, Harry Styles.

Dustin returned to screens across the country on Friday night alongside old colleagues Ray D'Arcy, Zig, and Zag in a bid to bring a bit of much needed nostalgia into our lives via a mini-reboot of the iconic kids TV show, The Den.

It was during the programme that Dustin took it upon himself to interrupt Niall Horan during a Zoom performance of his hit track, 'Black and White' to say that he wished Harry Styles was on the call instead. As a joke. For comedy. 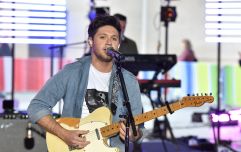 END_OF_DOCUMENT_TOKEN_TO_BE_REPLACED

Horan's fans, however, weren't too taken with the turkey, accusing him (and Ray D'Arcy, for some reason) of being "disgusting" and "unprofessional."

A fan page aptly named 'Niall Updates' led the charge against the puppet, later clarifying that they didn't know that "getting roasted by this Dustin the Turkey is considered an honour." 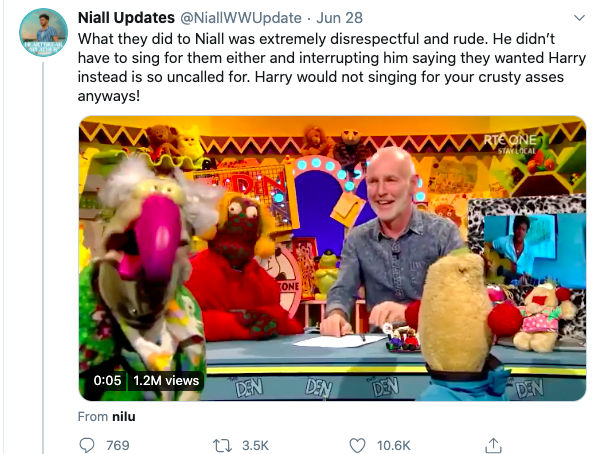 Dustin has since addressed the controversy (is that what we're calling it now?) stating that he does, indeed, love Niall Horan, Americans, and of course, the craic.

"Lads..." he began on Twitter today. "I’m a lover, not a fighter... I Love @NiallOfficial. I Love Americans. I Love The Craic."

The turkey then added the 'Be Kind' hashtag and made a reference to Kim Kardashian.

Well, thank God that's all been sorted out. Now, onto the good stuff.

RTÉ Does Comic relief raised over €5,000,000 (including a government donation) for charities up and down the country last week, providing vital funds for those struggling during the Covid-19 pandemic.

Phone lines are now closed but you can continue to donate here for the next two weeks.

Or at least show Dustin a bit of love. He needs it.

popular
Primark reintroduces female-only fitting rooms after two men walk in on woman
Anna Delvey is set to be released from prison
Davide Sanclimenti opens up on having kids with Ekin-Su Cülcüloğlu as he turns down Dancing On Ice
People are being warned not to dress as Jeffrey Dahmer for Halloween
Hilary Swank, 48, reveals she is pregnant, expecting twins
Today FM's Paula MacSweeney welcomes baby boy
I’m A Celebrity bosses ‘sign first Love Island contestant for 2022 series’
You may also like
7 months ago
Late Late Show fans in bits as Leona Maguire roasts Niall Horan's golfing skills
7 months ago
Niall Horan falls "extremely ill" on flight ahead of Late Late Show appearance
2 years ago
Niall Horan and coronavirus experts for tonight's Late Late Show
2 years ago
Niall Horan announces second Dublin gig due to phenomenal demand
2 years ago
Niall Horan has announced a charity fundraiser at the London Irish Centre next month
2 years ago
Fans think Hailee Steinfeld's new song 'Wrong Direction' is about Niall Horan
Next Page