"If a character needs to be fat, have a fat actor?"

The musical adaption of Matilda is coming very soon, and while we all wait in anticipation, it seems the new released trailer for the film has sparked some controversy online.

Throughout the trailer, Oscar-winning actress Emma Thompson can be seen wearing a "fat suit" for her role as the evil Miss Trunchbull. 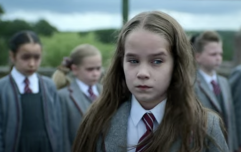 END_OF_DOCUMENT_TOKEN_TO_BE_REPLACED

The decision to use the suit has been criticised by many, with some going as far as to call the whole film "fat phobic".

Several people took to Twitter to point out that the role could easily have been played by a bigger woman, rather than a thin woman in a suit.

"We literally never need a skinny actor in a fat suit. And we should definitely hold actors, producers, directors and casting directors accountable to that until they STOP," one person said.

“Why would there even be a need for a fat suit instead of a fat actor? if a character needs to be fat, have a fat actor?" another wrote.

I can't believe someone would agree to put a thin person into this costume for Matilda the musical. The original was already fat phobic enough but now they put Emma Thompson into a fat suit. pic.twitter.com/TQRo7GrWoo

"I can't believe someone would agree to put a thin person into this costume for Matilda the musical. The original was already fat phobic enough but now they put Emma Thompson into a fat suit," a third added.

"I wonder if the studio forgot that in Matilda (1996) Miss Trunchbull was an Olympian (shot putter, hammer, and javelin thrower). She was tall, built, thick, why on earth would they go with a skinny woman in a fat suit??” a fourth said.

Others jumped in to defend Thompson and the new movie.

"A distinction should be made between fat suit performances and Emma Thompson in Matilda. Trunchbull is a towering, muscular former Olympic athlete, and Thompson has been outfitted accordingly.  Yes, her costuming alters her body’s appearance. But she’s not playing a fat character," one person said.

"It’s not even a fat suit. It’s padding because Trunchbull NEEDS it to be intimidating. Literally wtf is this," another wrote.

Last week, the trailer for the musical was released. Watch below:

popular
Love Island’s Afia explains why Gemma’s dad has not been mentioned on show
Love Island fans concerned over "bullying" of Ekin-Su
Two dumped islanders have confessed their feelings for each other since leaving the villa
Love Island fans are in shock after new boy Charlie revealed his age
Shaughna Phillips brands Love Island heart rate challenge "fixed" and "vile"
Ryan Tubridy has heartwarming reunion with Toy Show star Saoirse Ruane
PSA: Casa Amor is happening - and soon
You may also like
1 year ago
The film adaptation of Matilda: The Musical is coming next Christmas
1 year ago
Matilda's Bruce Bogtrotter is a doctor now - and he doesn't even like chocolate
2 years ago
Jodie Comer tipped to play Miss Honey in new Matilda film
2 years ago
Matilda the Musical is reportedly being turned into a movie for Netflix
2 years ago
World's favourite fictional teachers ranked and we're not surprised by #1
5 years ago
Miss Trunchbull from Matilda looks very different in real life
Next Page