Everything we know about Ekin-Su and Davide's road-trip show

Giving the fans what we want.

Davide Sanclimenti and Ekin-Su Cülcüloğlu, are without a doubt, the most entertaining couple to win Love Island.

During this year's season, the pair brought laughs, chemistry and drama. Lots and lots of drama. The relationship truly was, as Ronan Keating and Ekin-Su herself would say, a rollercoaster. 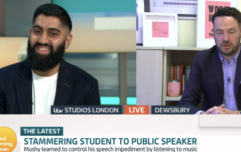 END_OF_DOCUMENT_TOKEN_TO_BE_REPLACED

Still, despite being voted the least compatible couple by their fellow islanders, Ekinde one the hearts of the British public, and in the end, they didn't just win the show, they won by a landslide. Figures from ITV show that Ekin-Su and Davide received a whopper 63.69% of the public vote, ahead of Luca and Gemma (14.47%), Dami and Indiyah (11.77%), and Tasha and Andrew (10.07%).

Ekinde scooped the grand prize of £50,000 but they have no intention of slowing down anytime soon. Over the weekend, and much to the delight of Love Island fans, the pair announced that they will be getting their own road-trip show in which they visit their homelands on ITV2.

END_OF_DOCUMENT_TOKEN_TO_BE_REPLACED

The pair made the announcement on Channel 4's The Big Breakfast on Saturday.

Needless to say, fans were delighted. In fact, many Love Island viewers had been calling for a camera to follow Ekin-Su and Davide around Italy and Turkey, and this is exactly what we're getting.

Blogger Elliot Gonzalez wrote: "YESSSSSS!!! ITV2 giving us what we want. Series confirmed for Ekin-Su and Davide as they spend a week in Turkey and a week in Italy."

YESSSSS!!! ITV2 giving us what we want. Series confirmed for Ekin-Su and Davide as they spend a week in Turkey and a week in Italy. #TheBigBreakfast #LoveIsland

popular
Here are the baby name trends set to dominate 2023
Here is the reported I'm A Celeb All Stars line-up
ITV boss defends Phil and Holly once more
Two Love Island 2022 stars have just become step siblings...
Irish twins featured by Gucci during Milan Fashion Week
5 delicious brunch spots around Ireland to try out on your next trip with the girls
Doctors move young girl to Dublin hospital after Co. Clare incident
You may also like
1 week ago
Who Wants To Be A Millionaire? contestant accidentally exposes filming secret at end of show
1 week ago
WATCH: Powerful Sinead O’Connor documentary primed for Oscar glory
1 week ago
WATCH: The trailer for Mila Kunis' new Netflix movie is here
1 week ago
Here’s the line-up for this week’s episode of The Late Late Show
2 weeks ago
A docuseries about the 'Bling Ring' is coming to Netflix
2 weeks ago
Bake Off star shares extent of online bullying and abuse
Next Page