For weeks now, fans have been counting down the days until Pat Phelan finally exits Coronation Street.

Last week, it was suggested that his fate would be revealed on Friday, March 30 as the truth about his evil crimes come to light.

END_OF_DOCUMENT_TOKEN_TO_BE_REPLACED

Spoilers released this week show that things begin to unravel when he is told that concrete he laid previously for a building job needs to be dug up.

As viewers know, Phelan dumped the bodies of Vinny Carver and Luke Ashford under the surface and this horrific secret will soon be uncovered.

Knowing he's about to be found out, he takes off with his partner Eileen on what's meant to be a romantic break. 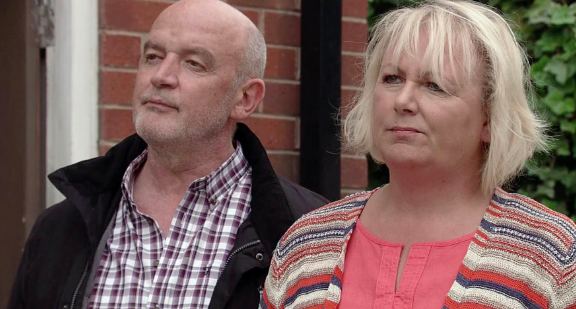 END_OF_DOCUMENT_TOKEN_TO_BE_REPLACED

However, once the grim discovery is made back in Weatherfield, Tim warns Eileen that she's in grave danger just as she comes across Phelan attempting to make a run for it with his passport.

After listening to Tim's message, Eileen attempts to stop Phelan from leaving but they end up in a struggle.

Eileen is in massive danger and Corrie producers have not yet confirmed if one or two characters will be killed off.

The below clip hints at danger for Eileen but it looks like we'll have to tune in to see if she manages to escape.

TRAILER: We've got a bad Phelan about this... ?#Corrie #CoronationStreet #Phelan #Eileen pic.twitter.com/aHn78XugVM