How did we not know this?

Since Disney+ came about, we've been watching Freaky Friday over and over, because why not?

But like everyone else who's been hooked on the 2003 remake for the last year, we certainly missed one major editing mistake from the film. 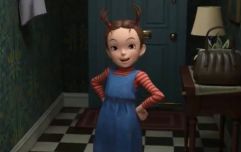 A brand new Studio Ghibli film is coming to Netflix

END_OF_DOCUMENT_TOKEN_TO_BE_REPLACED

The film surrounds Lindsay Lohan and Jamie Lee Curtis as Anna and Tess, who are constantly fighting. It isn't until one evening the mother and daughter swap bodies and need to learn to get along to get their lives back in time for Tess's wedding.

One particular Tiktok has gone viral on the app and shows some editing that was clearly missed in post-production, or maybe they were just hoping we'd never notice.

In the scene, Anna's younger brother Harry is sitting with his grandfather at the wedding when he's spotted by the caterer about to open a fortune cookie.

Fans will remember that it was the exact same thing that happened right before Anna and Tess switched, and to stop it again, the caterer leaps forward and tackles the kid.

But right before she does, this Tiktok user noticed that the child being tackled isn't Harry at all, but instead he's been replaced by a stunt double.

END_OF_DOCUMENT_TOKEN_TO_BE_REPLACED

Now, this is all well and good, only that the stunt double appears to be a fully grown man and not a child at all.

And with over 2.5 million views on the video, fans are flooding the comments wondering how they've never spotted this before.

One said: "What in the world! How have I never seen this! I've seen this movie so many times!!!"

Another said: "little did we know he too had switched bodies with a middle-aged person. but for only .007 seconds."

One eagle eyed fan however seemed to know this already, and said: "Fun fact: That was also Kevin's stunt double from Home Alone."

So there you have it, Kevin and Harry go way back.