A Fresh Prince of Bel-Air reboot could be on the way ... with a big twist

We're not too sure how to feel about this.

The Fresh Prince of Bel-Air could be set for a big TV reboot - only, this time, with a Fresh Princess.

According to TMZ, the company that owns the rights to the Fresh Prince recently filed a number of trademark applications.

They're said to be keen to lock down the rights to Fresh Princess for a TV show (among many, many other media platforms).

The company are also looking to trademark Fresh Princess on a bunch of new merchandise, including bags, clothing, footwear and backpacks.

There hasn't been any official confirmation that this is the reason they have been seeking out the new trademarks.

And while it's not immediately clear if any of the original cast members would be involved in the show, it's looking unlikely that fans would see would person in particular. 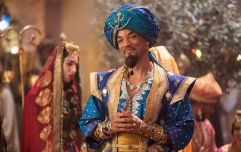 END_OF_DOCUMENT_TOKEN_TO_BE_REPLACED

Will Smith previously told E! News that they were planning to "leave that one alone", and that a reboot would only happen "pretty close to when hell freezes over".

In fact, he told Graham Norton last year that he couldn't even bring himself to watch the show.

“It was my very first role, and I was very, very focused on being successful, so I learned the whole script and everyone else's lines.

“If you watch the first four or five episodes, you can see I'm mouthing other people's lines. It's terrible and I can't bear to watch it.”

popular
'Lockblocking' is the dating trend all single people are dealing with right now
WATCH: Paul Mescal and Daisy Edgar Jones's first Normal People audition is stunning
The shows and movies you need to watch before they leave Netflix next month
6 cosy buys from Irish brands that'll make staying home a little easier
Irish woman behind TanOrganic gets incredible reaction after Dragons' Den appearance
Dublin TikTok house deny staging dance with couple having sex behind them
Kourtney Kardashian and Scott Disick are officially back together
You may also like
6 months ago
Jazzy Jeff tells Will Smith he 'couldn't remember 10 days' after becoming ill
1 year ago
Leonardo DiCaprio and Will Smith team up to save the Amazon rainforest - with runners
1 year ago
Will Smith surprised this Irish boy with a trip to Disneyland, and we're bawling
1 year ago
We're VERY happy with the casting for Will Smith's replacement in Suicide Squad 2
1 year ago
Everyone's saying the same thing about Will Smith as the genie in Aladdin
2 years ago
Will Smith admits to 'failing miserably' in 21-year marriage to Jada Pinkett Smith
Next Page