Big Brother ratings are down and viewers aren't happy about this year's line-up.

According to The Daily Star, 1.5 million viewers tuned in for the opening show, marking a considerable drop on last year. 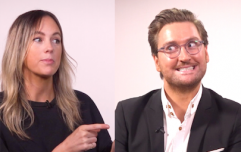 END_OF_DOCUMENT_TOKEN_TO_BE_REPLACED

The lineup has been criticised with some questioning why a number of the contestants have been on reality shows before when this is Big Brother and not the celebrity version.

Didn't even know #BigBrother was on! Then I read the line up... No thank you? most have a claim to fame already, bring back regular people!

@bbuk can we not just go back to having people who are just normal l! This isn't celebrity big brother

Others aren't happy about all the twists this year, including two houses and two sets of housemates.

"Day 1 in the #BigBrother House: all the housemates have left & the show's been cancelled"
sorry was just dreaming out loud...#BBUK

Turned on big brother to see what the twist is. Why do people watch this shit. Truly horrible tv

popular
A celebrity hairstylist just shared a genius hack for the perfect messy bun
What we can expect from Emily in Paris seasons 3 and 4
Penneys has a new homeware collection – and it looks so high-end
Here are all the Instagram accounts of the stars of Netflix's Cheer
5k walk in aid of Women's Aid to take place in honour of Ashling Murphy
Ashling Murphy will be laid to rest in Tullamore on Tuesday
"Traumatised" 10-year-old girl escapes from car as man steals it
You may also like
1 week ago
Molly-Mae Hague responds to backlash over controversial comments
1 month ago
Kim Kardashian requests for marriage to Kanye to be terminated immediately
1 month ago
Lindsay Lohan announces engagement to boyfriend Bader Shammas
2 months ago
Gigi Hadid speaks out after alleged dispute between Zayn Malik and Yolanda Hadid
6 months ago
"Who's laughing now?" Jake Quickenden claps back at trolls who called his baby "ugly"
7 months ago
Chrissy Teigen makes second public apology for "awful" cyberbullying
Next Page